The title may sound like it’s stating the obvious, but there’s more to it. I’m talking not about the Anglo-Saxon epic poetry hero but the DC sword-and-sorcery character based (sort of) on him. 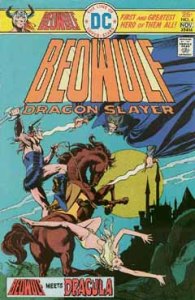 Marvel’s Conan the Barbarian was a big game-changer. It wasn’t the first Silver Age/Bronze Age sword-and-sorcery book—DC’s Nightmaster preceded the Cimmerian by about a year—but it proved a breakout hit (Nightmaster was a flop), and thereby inspired imitation. Marvel stuck to similar ideas, such as Howard’s King Kull, or Conan knock-offs such as Thongor and Brak the Barbarian.

DC, by contrast looked further afield. It introduced Fritz Leiber’s Fafhrd and the Grey Mouser to their own series (so poorly done I may have to blog about it another time), and created original characters Stalker and Claw (who I’ll definitely write about another time). And turned Beowulf into a comic-book hero. None of them worked—DC wouldn’t have a genre success until Mike Grell’s Warlord in the mid-seventies. Then again King Kull and Red Sonja (based on a Robert E. Howard character) were Marvel’s only other S&S hits, so I guess there’s no miracle comics formula for this genre.

Back to Beowulf (cover by Ricardo Villamonte, all rights to current holder). Written by Michael Uslan, this was one weird book, which is why I’ve been meaning to blog about it since rereading it.

The series retains the basic set-up, King Hrothgar summoning Beowulf to help destroy Grendel, the monster terrorizing Hrothgar’s great mead-hall of Heorot. Quite aside from Beowulf’s non-Saxon garb, the opening issue or two give us added characters: the warrior woman Nan-Zee, the sorcerer Shaper—and remake a couple of others. Unferth, Beowulf’s jealous rival, is now a sorcerer in his own right.

Oh, and we learn in the second issue that Grendel is Satan’s agent on Earth, there to spread misery and despair (it’s implied he’s also a byblow of Satan). Satan (a rather barbaric look by Villamonte) cheerfully taunts Beowulf that he can’t beat Grendel (as proves to be the case) without a magic potion, so the mighty Geat heads off with Nan-Zee and his friends to get the ingredients. The quest leads them into run-ins with gods from outer space, Greek myths, minotaurs, oh, and Dracula. Who is as far removed from the real Vlad Tepes, Drakul, as Beowulf is from the poem—no, further. He simply shows up hunting the wandering tribes of Israel and drinking blood (“I never drink … wine.”) even before Beowulf kills him. At which point Satan turns him into a vampire out of respect for his evilness.

This leads to a plotline in which Grendel, realizing he’s losing Satan’s support, kills and replaces Satan, then prepares to battle Dracula. I’ve no idea how that would have played out, as this was the last of the six issue run.

The book certainly isn’t A-list, but it is quite fun in an over-the-top way. And an interesting example of what you get when you throw everything but the kitchen sink into a series.