Sherlock Holmes: “Insensibly one begins to twist facts to suit theories, instead of theories to suit facts.” 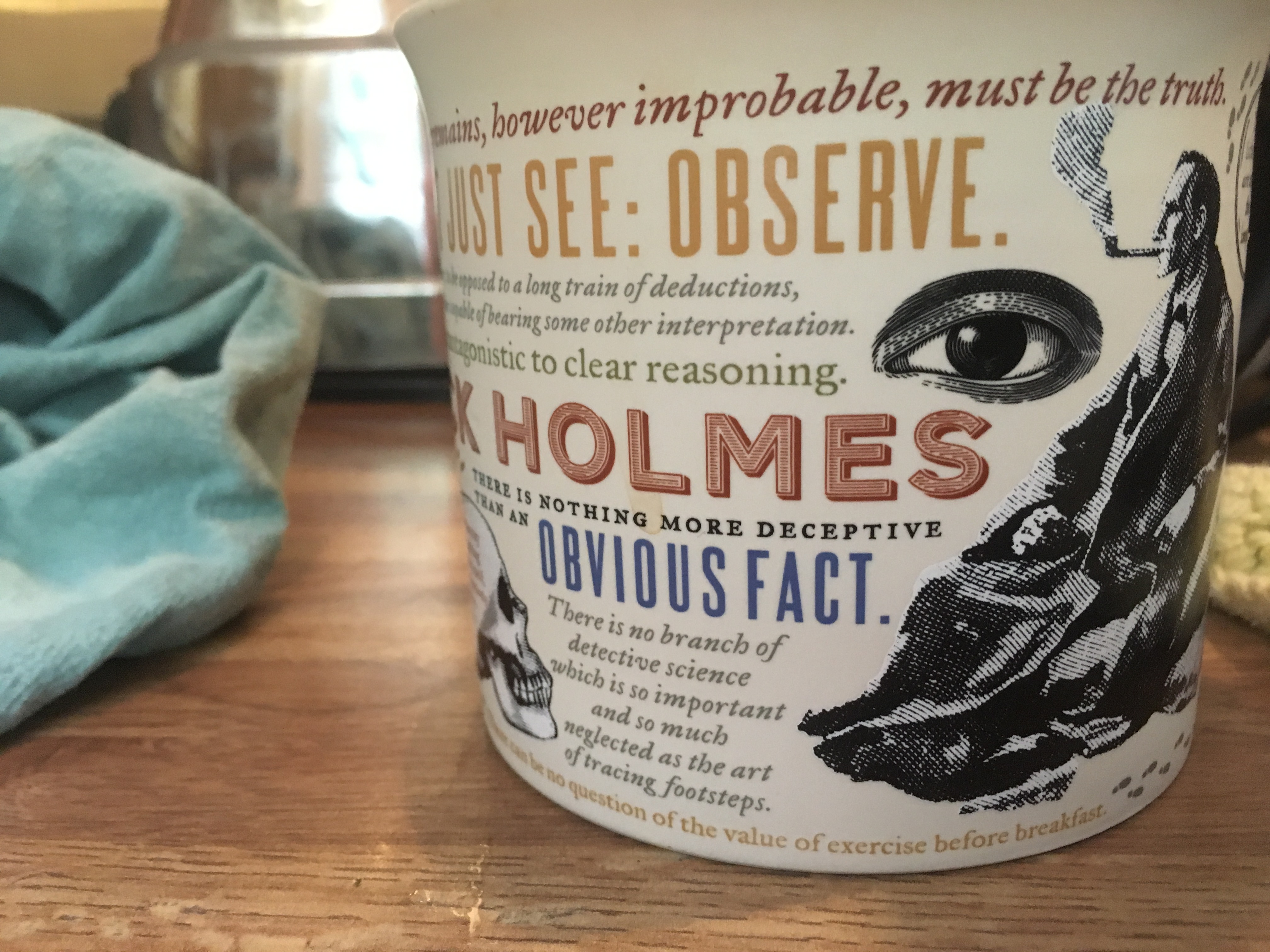 The Holmes quote on my mug says that it’s a mistake to theorize in advance of the facts (though Holmes did that quite a bit), but I think his reason why is much more applicable to writers. In fiction it’s perfectly fine to theorize about your story (plot, character, twists) before you write it. The trouble comes when what we have in mind doesn’t work for the story on the page, but we don’t admit it.

Case in point, my original concept for No One Can Slay Her was set in the 1930s. Jenny was hardboiled instead of aristocratic; her wife was a Nisei instead of a beatnik; the opening of the story involved a foreign agent putting her under a sleeping beauty-type spell.

Trouble was, as I fleshed out the main concept it didn’t hold up. The rationale for the spy enchanting Kate didn’t make sense, neither did Jenny’s response. Even after I changed the characters to their current, 1950s versions, the villain’s scheme still seemed pointlessly convoluted. So I rewrote pretty much the entire plot until it worked.

The alternative is to twist your story or your characters to suit your concept. One of the things I hated about Lost was that maintaining the mystery required massive amounts of idiot plot: Locke makes a cryptic comment about what the island wants, everyone looks thoughtful but nobody ever grills him about what, exactly he knows or intuits. In the mystery novel Have His Carcass the murderer’s plot is absurdly complicated because that’s the only way Sayers’ can justify her opening, in which Harriet Vane finds a fresh-bleeding corpse on a beach at low tide with nary a footprint around it.

Avoiding twisting can require changing the original concept, but it may be your characters or your story has to change. Every cozy mystery is built around the concept of an amateur detective investigating a mystery; as mystery novelist Barbara Ross says, that requires giving your protagonist a very good reason for investigating instead of leaving it to the cops. If you don’t have a good reason (and some novels don’t) you can’t drop the murder investigation so you have to change your character or your plot to provide one.

I had the same problem, as I’ve mentioned before, with Southern Discomfort. My protagonist Maria really didn’t have a good reason to help Olwen McAlister avenge her husband’s death, and I kept trying to find one that would make her stick around Pharisee and fight. Turns out there wasn’t, so I had her do what most normal people would do when threatened by a supernatural killer: run. Only it turns out this isn’t an option … This makes Maria considerably less heroic than I wanted, but there’s no way around it.

#SFWApro. All rights to mug image remain with current holders.