Style and Substance: the Stuff That Screams Are Made Of 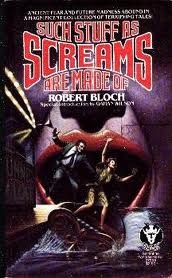 Rereading Robert Bloch’s collection The Stuff That Screams Are Made Of gave me fresh appreciation for Bloch’s ability to write with style.

It’s his narrative voice that particularly stands out: it changes from story to story, and quiet effectively. In The Big Kick, for example, we have the voice of the sleazy Beatnik rapist Mitch (“Sure he’s got the hots for you but he’s too sick to make move one. Too sick for the big kick.”) vs. the more intellectual (but just as nasty) Kenny (“An immature in-group’s set of catch phrases used to dramatize irresponsibility.”). Then there’s the poor whites of A Case in the Stubborns (“That porch was like a bake-oven in the devil’s own kitchen.”) and the deadpan government-report voice of Talent (“We have little information on Andrew Benson’s growth and development between the summer of 1950 and the autumn of 1955.”) and the Damon Runyonesque tone of Luck Is No Lady (“What made her think he’d go back to being a working stiff now that he had all that dough in his kick?”).

The Pin doesn’t have as much of a distinctive voice but in showing Death at work, Bloch does convey the scope of what’s going on: “How many others had died today, in how many cities, towns, hamlets, crossroads, culverts, prisons, hospitals, huts, kraals, trenches, tents igloos?”

It’s all the more impressive given Bloch started writing with painfully bad imitations of HP Lovecraft’s style (admittedly something lots of us, myself included, have tried to imitate). He worked hard, was extremely prolific, and improved steadily.

For me, style doesn’t count for much if the underlying story isn’t good. While I like Bloch a lot, this collection is a mixed bag. I loved The Pin and the Lovecraftian The Unspeakable Betrothal (not his choice of title), enjoyed most, but The Big Kick and Life In Our Time fall into the same Kids Get Off My Lawn mode as the stories in Fear Today — Gone Tomorrow. The stories sometimes feel misogynistic, as the woman are mostly there to die. Of course, so are the men, but at least they get to be the protagonist before the axe falls (Unspeakable Betrothal and The Weird Tailor are exceptions). The Big Kick is the worst, casually tossing off that Mitch raped his girlfriend Judy as if it were no big thing (back in 1959 that was a common sentiment, but that doesn’t make me like it better.

Heavens, having started rereading my handful of Bloch books back in 2011, but then getting distracted, I think I’m almost done.