Like a lot of adventure heroes, some of Doc’s stories center around a McGuffin, that thing everyone is determined to find or possess. Alfred Hitchcock, who coined the term, said the McGuffin was irrelevant, but as I’ve written about before, sometimes having a cool McGuffin helps. Which leads us to these early 1945 (pre -VE Day) stories —

THE TEN-TON SNAKES opens with a well-written description of American veteran Bob French, focusing on his medals (“The years and terrors of a man’s life, worn over his heart.”) before he goes and asks Renny for help. Bob’s brother Tucker has gotten him tangled up in something involving a shipment of snak eskins, and people are trying to kill Bob as a result. When Renny calls in Doc, Bob fakes an assault on himself and leaves. It turns out his brother is a draft dodger, so Bob’s worried how Doc will take that (it shows the change of generations that to me draft dodger isn’t at all a bad thing). Doc, Renny and Monk (unusually without Ham) begin investigating, find the box of snake skins and discover they’re impossibly heavy, just like the title says. Complicating things are two female adventurers: Grace, stunningly beautiful, and Bill, who has a voice like a bull fiddle and can punch Monk hard enough to hurt. I figured she’d turn out to be a man in drag, but no (of course, Dent wrote muscular women into Fortress of Solitude so it’s not without precedent). Everyone goes off to South America where it turns out Tucker has discovered a white dwarf star meteorite (not that they call it that exactly). Unusually the bad guys don’t have a way to exploit it as a doomsday weapon: they plan to carve off bits and make a fortune selling it to physics lab, then take smaller bits and sell them as novelty items to the public (the pebble that weighs like a boulder!). It’s a solid story, though Doc’s unease in the middle doesn’t really pay off.

Next, Monk, Han and Renny are assigned to take a submarine trip to protect a CARGO UNKNOWN, sealed inside one room of the sub. Unfortunately a slick crook named Clark wants what’s in the room, infiltrates his men into the sub (he’s been working for several years to figure out how to do this if he ever needed to) and sinks it. Clark and his men get off, Renny barely escapes and Monk, Ham and the crew remain down there. With 12 hours of air left. And after a fisherman rescues an unconscious Renny and takes him to shore, Renny has no idea where to locate the sub. He calls in Doc, but do they have enough time? 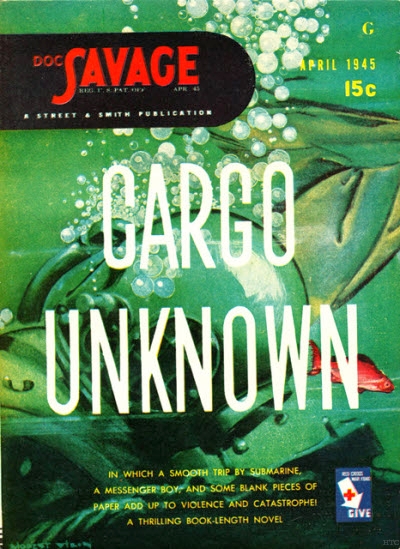 Given the suspense about the sub’s sealed room, I was disappointed to learn the contents were just a big pile of Nazi gold, being shipped to the U.S. before anyone in Germany could make off with it. But that’s a minor flaw in a nail-biting story, a race against a ticking clock where it seems impossible even Doc can pull it off.

There’s quite a bit of technical detail about flying and diving (both of which Lester Dent had learned to do) but it doesn’t hurt the story. It’s a very good one, and Clark’s scheme comes off more plausible than Terror in the Navy.

ROCK SINISTER has two beautiful redheads, Abril and Kathy, traveling to see Doc from Bianca Grande (which Dent emphasizes is only a pseudonym for a real country — Rick Lai suggests Uruguay). They’re seeking Doc’s help because of a killing spree centered around a stone Mayan codex; the artifact has been destroyed, but the bad guys want a museum’s photos of it. Doc, however, knows the artifact and that it’s not even remotely remarkable. So what gives?

It turns out that what gives is the current president’s yearning to become a Hitler/Mussolini type fascist. He’s created a baffling mystery he’s confident will draw Doc to Bianca Grande, then he’ll set up Doc as the ringleader behind the killings, an evil tool of American imperialism (pointing out he’s already worked to shape Japan’s post-war government in Jiu-San). Fighting back against America’s supposed attack on Bianca Grande’s sovereignty will give him cover to seize dictatorial powers. In this case, the McGuffin really is meaningless, but that works for me.

As is common for this period, Dent offers opinions on Doc and on his own earlier writing. In Ten-Ton Snakes Doc suggests that his itch for excitement comes out of being denied a normal boyhood; if his years of training hadn’t warped him, he’d probably be a married, bridge-playing suburbanite. This doesn’t fit his view in Invisible Box Murders that his yen for excitement is a separate thing and kept his training from driving him nuts but it’s quite possible Doc’s entertained different views of this over the years. Renny similarly reflects here that he and the other guys have been warped by their own enthusiasm for thrills — here they are, middle-aged with no family, no kids, just each other. Is that just more of Dent’s more realistic approach or does it also reflect the emphasis on getting back to normalcy that became a thing in the post-war years?

Then in Cargo Unknown, Dent has some metacommentary about the tech Doc used to use, mocking it as ridiculous “pseudo-scientific ubelievable” nonsense.

Minor continuity glitches include Doc’s bulletproof office windows now being normal glass and Monk going from dead broke in Ten-Ton Snakes to back in his penthouse apartment in Rock Sinister, which gives Habeas his last appearance (in the fancy, tile-lined hog wallow Monk set up for him.).

#SFWApro. Covers by Modest Stein, all rights to images remain with current holders.