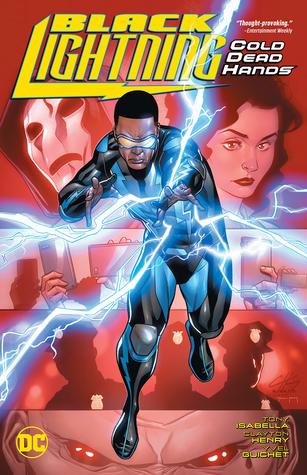 BLACK LIGHTNING: Cold Dead Hands by Tony Isabella and Clayton Henry has Jefferson Pierce return home to Cleveland after his father’s death (unlike the pre-New 52 continuity or the TV show, peacefully in his sleep). The Tobias Whale that Black Lightning once battled has been replaced by the real Whale whose identity he misappropriated (a fatal mistake), a Keyzer Soyze-style shadowy schemer whose current plot is to put alien weapons in the underworld’s hands, thereby creating an outcry for police to use them too, and for private citizens to get them. And guess whose going to reap a fat profit from supply the demand?

This is good, but frustrating. Whale’s scheme is good, and Jeff’s new supporting cast is fine, but I hate it when a reboot leaves me baffled what’s still canon. I understand and applaud Isabella wanting to get away from the Evil Albino stereotype of the original Tobias, but are Jeff’s battles with him still in continuity or not? It appears so, but then again why doesn’t Jeff react to facing another Whale, or Tobias point out he’s way more dangerous than the imposter? Why did Jeff even go to Suicide Slum where he began his career? That he’s never met Lynn until recently is further jarring. So like I said, frustrating — though I’ll be happy to keep reading if we get more.

BPRD: The Devil You Know: Pandemonium by Mike Mignola, Scott Allie and multiple artists is the penultimate volume before the inevitable (so we’re told) apocalypse. Hellboy’s back with the BPRD, but will it do any good as the demon-cbild Varvara turns New York into ground zero for her new kingdom of the damned? Once again (as Hellboy notes), the BPRD has to invade a nightmarish Big Apple, but this time they have all the big guns, from old-timers like Abe and Liz to relative newbies such as Ashley Strode. Will it be enough?

Action-packed certainly, but it feels like Mignola’s rushing too fast to wrap up everything in the final volume, which makes it choppy and confusing at times. And given Varvara and Hellboy were both fond of Professor Bruttenholm, I’d really have loved to see them talk about him a little. Still I look forward to the finish later this year when we (hopefully) learn how the ending twists and reveals here make sense.

BLACK HAMMER: Age of Doom Part One by Jeff Lemire and Dean Ormston follows up the first two volumes by having Lucy, newly empowered as the second Black Hammer, bounce through a series of nightmare worlds before returning to Rockford and learning the truth about what’s been happening to her fellow heroes. It’s a good story, but the reveal is actually one I suspected earlier, and not that interesting. Given how much of the book has been riffing and meta-commenting on various superhero types (Abe Slam, the nonsuper Golden Age tough guy, Golden Gail as Mary Marvel, Madame Dragonfly as one of DC’s horror anthology hosts), I’m worried that returning to the real world will lack the appeal of the series’ stranger moments. Fingers crossed I’m wrong.