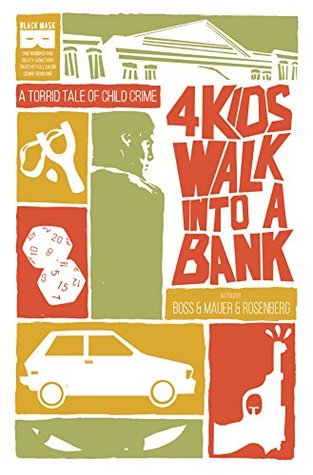 FOUR KIDS WALK INTO A BANK by Matthew Rosenberg and Tyler Boss has a quartet of nerdy twelve year olds encounter a bunch of vicious adult punks, then discover Paige’s (the one girl of the foursome) father hanging out with them. It turns out Dad owes them a big favor, so he’s going to help them rob a bank. Horrified, Paige convinces her friends the only way to save him is rob the bank themselves first … This is an odd mix of whimsy and realism, but it works, right up until the end — I won’t go into details to avoid spoilers, but a couple of twists just didn’t make sense to me. Still worth reading, though.

PAPER GIRLS has been a consistently fun series and Volume 5 of the TPBs is no exception. At the end of Vol. 4 (I can’t find my review to link to), Tiffany, Mac, KJ and Kristie found themselves in the distant future from which all the time travelers have been visiting 1988. Now they have to navigate around the alien setting, looking fora  way home, looking for answers and looking for a cure for Mac’s leukemia. Great fun as always, tying up a couple of questions from earlier books an ending on a heck of a cliffhanger.

SAGA Vol. 9 by Vaughn and Fiona Staples didn’t work as well for me as the earliest volumes. All the individuals scenes of Hazel, Marco, Alanna and the rest of their oddball cast are good and engagingly quirky, but taken as a whole, it feels like the creators are just randomly shuffling pieces across a game board. I find it hard to remember much that happened, and even the ending cliffhanger didn’t shock me as much as it should have. Staples and Vaughn have announced a year’s break to recharge, so I hope things pick up when they return.

THE FORBIDDEN GAME trilogy by LJ Smith started with The Hunter and continued with The Chase and The Kill. In The Chase, which I thought I’d reviewed already, Jenny and her friends discover her supernatural stalker, Julian, has escaped the prison they left him in. Now his monstrous creations are stalking and capturing them, and if Jenny can’t figure out where Julian’s stashing them, she’ll end up as his bride for eternity. Complicating things are the kids desperate attempts to explain everything that happened in the first book to unbelieving authority figures.

The Kill wraps up the series (though a couple of elements make me wonder if Smith was hoping for a sequel) as Jenny and the survivors of the previous book take the fight to Julian in the Shadow World. This turns out to be the creepy setting of an abandoned amusement park where souls get trapped forever and the hokey games have a deadly component. This is creepy but the character arcs for Julian and Jenny are particularly good; I also like that just as Smith pulled off a good Face Your Fears storyline in The Hunter, here she succeeds with an excellent Face Your Darkest Secrets scene. Someone should really make a miniseries of this some time.

#SFWApro. Top cover by Boss, don’t know the second artist; all rights to both images remain with current holders.