A throne worthy of my awesomeness!

It took a while but late last Friday we got a big chair/small couch to go with our new loveseat. I think it’s a win.

For one thing the old armchair was very, very old. As in I could sometimes feel the springs down below the cushions, waiting to rip apart the fabric and thrust up into my buttocks. And it was normal armchair size, which meant I could fit Plushie or Trixie, but not both. Sometimes, in the evenings, when TYG had the couch (now the loveseat), they both wanted up and it wasn’t doable.

The new chair (the dark one in the photo) is big enough I can sit comfortably with both of them. They like that. I like that. We are, however, having to teach Plush Dog to use the ramp up to the chair rather than jumping, which is bad on his back. He does it with the love seat, but he’s not used to the ramp in the new position. Tempting him with Cheerios works to lead him up though, and he’ll get the hang of it eventually. 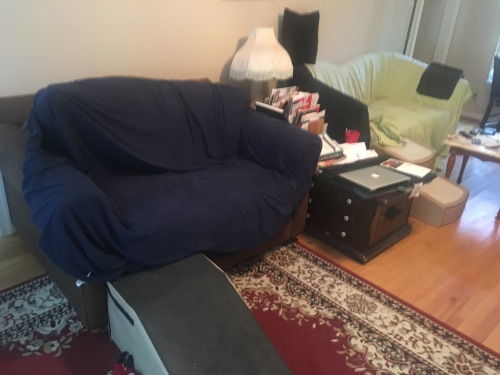 #3: As you can see, I have the coffee table between the two seats. That gives me much more space than the old sidetable to place papers, books, research books, Writers’ Market, my planner, etc. And it’s easy for me to reach over and grab them, even when I have a dog in my lap. I am having to fight the temptation to just pile up more stuff in that space, though.

That said, the seat area is probably smaller than the couch, which was where I used to sit when I worked. When both dogs are up here, they really squoosh me, and it gets awkward after the first hour. It’s harder to get traction and actually get off the couch around the dogs (I am a master dog contortionist). But despite that slight drawback, this chair is a solid win.