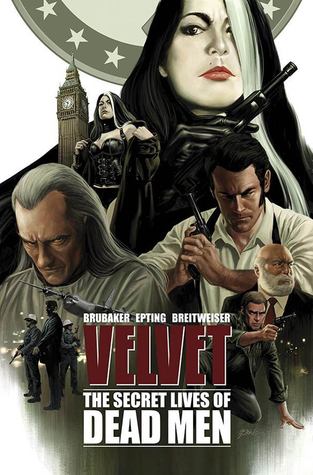 VELVET: The Secret Lives of Dead Men by Ed Brubaker and Steve Epting follows from Before the Living End as Velvet Templeton, the world’s deadliest administrative assistant, tries to stay one step ahead of the hunters from her old agency, ARC-7, while figuring out what’s behind framing her for murder. How deep is the rot, and just how big are the stakes? A solidly enjoyable Bondian thriller (what if Moneypenny had been a double-O agent before her desk job?); I’m looking forward to the conclusion in The Man Who Stole the World

THE THIRTEENTH CHILD: Frontier Magic Book One by Patricia C. Wrede is the story of Eff, a nineteenth century American child in an alt.history where magic works. Her twin brother Lan is the seventh son of a seventh son, but they had a lot of daughters too, which makes Eff the thirteenth child. According to some of her relatives, that guarantees she’ll go to the dark side, which troubles Eff too as the family moves to the frontier (dominated by dragons and megafauna such as the mammoth) and she starts learning magic in earnest. This is a very slow set-up-the-world book, but I must admit it engaged me anyway.  However I can see why some readers thumbed down Wrede’s treatment of native Americans, which is to erase them (apparently she couldn’t make them fit with her story): they never crossed the land bridge from Asia, so the continent is empty. I can live with that, but if you can’t, be warned.

#SFWApro. cover by Epting, all rights remain with current holder.

One response to “Spies and frontier children: this week’s reading”