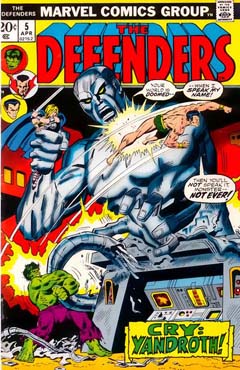 THE DEFENDERS on Netflix wrapped up after eight episodes, which I didn’t realize (so as E8 wrapped up, I was wondering what they’d do for the rest of the season). This has zero cast in common with the comic-book version (cover by Sal Buscema, all rights remain with current holder), instead putting the stars of Netflix’ Jessica Jones, Daredevil, Luke Cage and Iron Fist together when the Hand’s immortal leaders (Sigourney Weaver most notably) and Elektra launch a scheme that will destroy New York. Seeing all four characters and their supporting casts join forces was a blast, just as much fun as back when I was a kid and superheroes occasionally crossed into each others’ comics. Whatever flaws their might have been faded in that light. “We had a moment — but we didn’t have it long enough.”

The fourth season of STAR WARS: The Clone Wars had a weak opening arc involving a battle on Admiral Ackbar’s watery homeworld but picked up in subsequent arcs: Captain Rex’s platoon falls under the command of a general who sees them as cannon fodder, Obiwan goes undercover with a team of mercenaries, Ventress contemplates a career change and Darth Maul returns. A lot of stock elements (the Rex plotline has a lot of WW II combat-film tropes) but used well. “We’re pirates you fool — looting is what we do.”

Moving on to the 2017 season, ONCE UPON A TIME‘s new reboot season has one big asset, Lana Parrilla in a new, non-evil role, and clearly enjoying herself. Unfortunately Gabrielle Anwar’s role as the new Wicked Queen recycle’s Parrilla’s S1 Regina. Of course the whole plot is recycled: a grown-up Henry meets a girl who claims to be his daughter and tells him his family have lost their memories through being trapped in a curse, the same set-up that Emma dealt with in S1. And if they’d done this a couple of seasons ago, I might have bought it, but now it just feels tired. “A glass slipper? Do you know how many girls have my shoe size?”

THE INHUMANS on NBC gives us the original Inhumans, the royal family of the lunar-based city of Attillan, rather than the terrigen mutated characters on Agents of SHIELD. As in a lot of comics, ruler Black Bolt’s scheming brother Maximus (so far coming off more sympathetic than in the books) usurps the throne forcing the royal family — Medusa, Black Bolt, Crystal, Lockjaw, Gorgon, Karnak — to go on the run in Hawaii. I’m watching it, which is more than I can say for Once Upon a Time, but it’s not gripping, just sort of … there. “You have dependency issues, and you chew with your mouth open.”

The new mutant series, THE GIFTED, is a better superhuman show: in a world where the X-Men and the Brotherhood have vanished, a mutant underground tries to stay off the government’s radar, but it’s getting complicated … Back when Chris Claremont started writing X-Men this would have been an unbelievable TV series, but the themes of persecution are so common now it feels derivative — Tomorrow People covered the same territory as well or better, and Heroes Reborn had some of the same elements. To say nothing of hundreds of X-Men/New Mutants/X-Force comics books. I’m still watching, but strictly as a talking lamp. “I have no idea if the blast that killed my girl came from a good mutant or a bad mutant.”

One response to “TV seasons wrapping up or just starting (#SFWApro)”