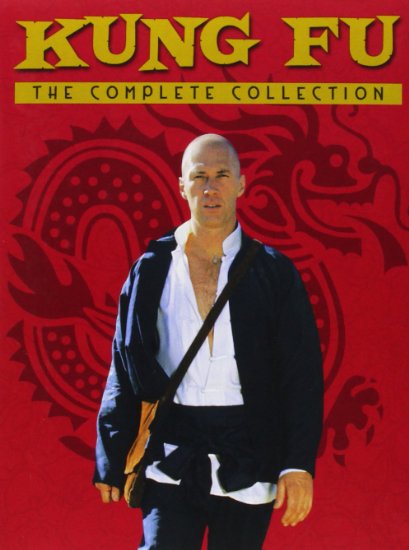 KUNG FU caused a sensation when it aired on TV in 197x. David Carradine plays a half-American Shaolin monk who kills the Emperor’s son (after the latter killed Caine’s beloved teacher) and so flees to America, where he seeks to find his half brother Danny Caine. Traveling across the West, sharing Eastern philosophy and doling out kung fu kicks when necessary, it was like no Western (or TV show) ever seen (including dealing with racism in the Old West more frankly than most sixties westerns did). And it went a long way to broadening American interest in the martial arts (it was after this series that Marvel put out Master of Kung Fu for instance).

Of course 40 years later I’m aware that it’s yellowface casting (David Carradine was thoroughly Caucasian) and with its share of Asian stereotypes. Nevertheless, having just watched the first season on DVD (I picked up the set a while ago), it still works for me. All rights to image remain with current holder.

Netflix’s IRON FIST, on the other hand, didn’t work at all. Carradine was good in his role; I can’t think of anything Netflix gained by putting largely forgettable Finn Jones in the lead role as Danny Rand, who’s returned to New York and the company his father built years after vanishing in the mysterious East, supposedly dead. Almost nobody believes he’s the Iron Fist, a mystical martial arts champion chosen as the adversary of the Hand, those ninjas from Daredevil — and the people who do believe, Danny comes to wish did not. Danny in the comics is a white guy, so it’s not yellowface, but I can understand why a number of Chinese Americans would have liked someone Chinese or Eurasian in the role (it’s not as if the story requires Danny to be white, it was just that in the Bronze Age that was still the default for characters). Admittedly I’d be more forgiving if the series was good, but it wasn’t: it spends an astonishing amount of time on Danny’s legal and boardroom maneuvers as he struggles to get the company back and direct it more effectively.  A flop all the way around.

Then again, it’s still superior to the BBC/s 1965 SHERLOCK HOLMES series. Despite adapting Doyle’s stories well, this tanks due to Douglas Wilmer’s portrayal of Sherlock — with his plummy, uppercrust accent, Wilmer comes off as a very pompous, stuffy kind of Sherlock. And neither of those attributes should ever apply to the great detective.

The second season of ADDAMS FAMILY has been a pleasure to rewatch. The cast are amazing (there’s a great spotlight episode for Ted Cassidy as a love-smitten Lurch) and even though the shticks and tropes don’t change from show to show, it’s goofy and over the top enough to work. And the Addams are still so outside the mainstream that even years later, the show hasn’t become dated. It’s easy to see why it’s had so many spinoffs (cartoons, the two movies, and recently a film-to-Broadway musical).