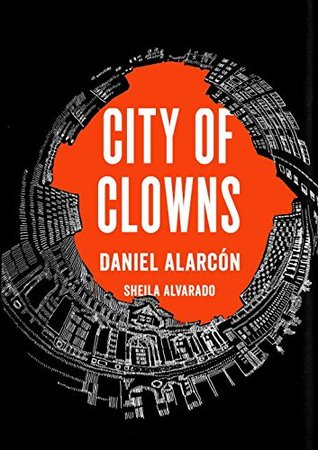 CITY OF CLOWNS by Daniel Alarcon and Sheila Alvarado (cover by Alvarado, all rights to current holder) has a journalist who recently lost his father reflect how his father’s life of petty thievery, and his not-to-secret second family by another woman, have shaped the journalist’s own life. Well done, not really to my taste, though.

XMEN: World’s Apart by Christopher Yost and Diogenese Neves has Storm struggling to balance her duties as Queen of Wakanda with her responsibilities as a member of the X-Men, a struggle made worse when the mind controlling Shadow King takes over the Black Panther. This is well executed but lost points for the use of the Shadow King, one of my least favorite mind controllers.

A GATHERING OF SHADOWS by VE Schwab starts well as female pirate Delilah Bard singlehandedly captures a rival pirate ship. And I like the setting in different alt.Londons that are linked together, some with magic and some without. Unfortunately I lost interest after the swashbuckling opening — from that point on there’s no real tension as everyone just wanders about thinking of life and exploring London (up to about page 200 when I gave up). And choosing Alucard as the name for one pirate really distracted me — characters who use the name are invariably Dracula (spell it backwwards) yet this guy doesn’t appear to be any sort of vampire (as Lin Carter says, don’t just throw recognizable names into a story). A shame the body of the book wasn’t as awesome as the beginning.

All rights to image remain with current holder.