For the opening novels of 1941, we get THE DEVIL’S PLAYGROUND by Alan Hathaway and BEQUEST OF EVIL by William Bogart. 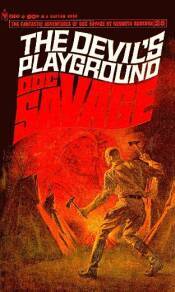 The Devil’s Playground (cover by James Bama, all rights to current holder) seems to take place in the Great Lakes equivalent of the “modern west.” That’s a term for movies and radio shows that use standard Western tropes while unmistakably set in the present day. Here, for example, we have Ojibway running around in war paint, demanding the white man leave their land before the curse of the Devil’s Tomahawks (which can cut a man fifty times in a matter of seconds) kills the red man as well as the white. If the white man refuses, look out, they’re “on the warpath.”

Why yes, it is heavy on the stereotypes (including the “superstitious savages”). The plot concerns a slowly collapsing mining operation — the iron the owner hoped for just isn’t there — in the north woods that’s become the target of the Devil’s Tomahawks. Doc, of course, suspects something fishy, but why would anyone want an iron mine that has no iron? Answer: it has nickel! Nickel is vitally important for military manufacturing, the area is rich with it so the Russians are out to take it, using the Devil’s Tomahawks as a smokescreen (this is the first time I can think of since WW II that one of the stories has blamed a specific nation rather than an Unnamed Foreign Power)

The villain’s gimmick, an adaptation of the medieval Iron Maiden, worked when I first read it. Reading in sequence, I’m aware that the same trick figured in The Crimson Serpent just a couple of years earlier. That cost Hathaway points.

There are an assortment of Doc gadgets, including having him hide one tiny device up his nose. And as in The Purple Dragon we have references to pre-Man of Bronze adventures, showing Doc was already busting the bad guys before his pulp series started.

Bequest of Evil is one of those I hadn’t read when it came out in paperback, and it’s a much better book (cover by Emery Clarke, all rights to current holder). It starts with an attempt to kidnap Doc, which surprises him: he’s used to crooks making pre-emptive strikes, but to kill, not to kidnap. Then Monk discovers he’s inherited a British Earldom and estate in Canada that goes with it. Not being an idiot he checks out to see if this is a trap (no!), then heads north to his new property.

More kidnap attempts on Doc and his crew follow. There’s a running gag about Monk trying to class up his act for his new station in life. And there’s a mystery figure who looks like Monk, probably the weakest element — seriously, anyone as physically unique as Monk and he just happens to have a double?

It turns out that gang boss “Lucky” Napoleon has set up this elaborate bait for Monk (it was a trap after all!) because — well, he screwed up and thought Monk was the electrical wizard on the team instead of the chemist. Napoleon has found a way to scramble all radio waves except the special short-wave radio his enslaved technicians have developed; whichever European nation he sells it too can shut down all communication except for its own.

The novel is one of the series’ straight pulp novels — for the most part it could have been done with some ordinary pulp adventurer rather than Doc. Which is not meant as a put-down, it’s fast-moving and fun. 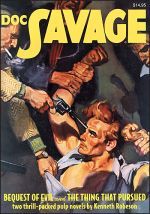