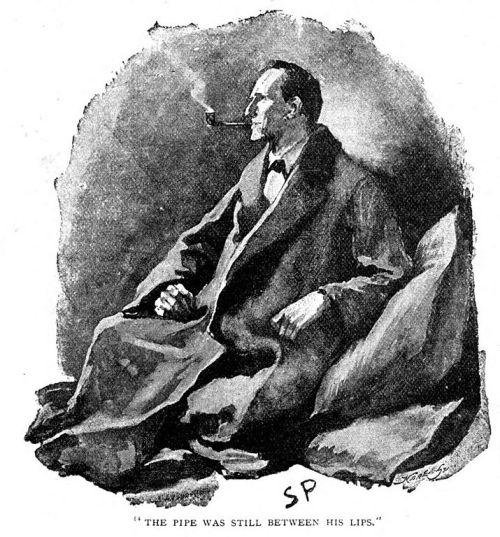 So as I mentioned yesterday, I recently finished rereading The Adventures of Sherlock Holmes (art by Sidney Paget for Man With the Twisted Lip). As I’ve mentioned before, I can’t really think about Holmes in an objective way — he’s too important to my mental landscape. But here are some non-objective thoughts:

•There’s more variety in the stories than I remembered. Although the basic structure is consistent — client comes to Holmes, asks for help, Holmes investigates — there’s a lot of difference between the oddball Red-Headed League (one of my favorites) and the more conventional Adventure of the Speckled Band. While Holmes usually cracks the case, Doyle was okay with having him fail to save his client in The Five Orange Pips. And a lot of the stories don’t involve crime, such as The Man With the Twisted Lip and The Adventure of the Noble Bachelor.

•I liked Mary Morstan a lot in Sign of the Four. Here she’s a cypher — her only function is to smile benignly when Watson asks to go hang out with Holmes. I suspect if Doyle had known he’d be writing Holmes so much, he wouldn’t have married Watson off.

•The frequent references to earlier stories get annoying in a collection, though they’d have made more sense when the stories appeared individually, stretched out over months.

•On the other hand, here’s where Watson and Holmes keep bringing up references to untold cases, and those always fascinate: “his summons to Odessa in the case of the Trepoff murder or the singular tragedy of the Atkinson brothers at Trincomalee,” for instance.

•Doyle is often a sloppy writer. Mrs. Hudson becomes Mrs. Turner in one story; Mary refers to John Watson as James once.

•Watson is far from stupid (though I knew this already). He has a keen eye for detail, a good assessment of character — he sums up the pawnbroker in The Redheaded League in a trice — and he successfully attempts a deduction here and there.

•Holmes’ singular character helps even a weaker story stay entertaining. It’s not just the quirks but his cool confrontation with the bludgeoning Dr. Roylott or his giving the cut to the King of Bohemia (there’s no other way I can interpret his “accidentally” missing the king’s proferred hand at the end of A Scandal in Bohemia).

In any case, this set the general pattern of Holmes adventures for years to come.

One response to “Sherlock Holmes: the short story years (#SFWApro)”