Catching up from before the year turned—

The events of BLOOD IN THE WATER: The Attica Prison Uprising of 1971 and Its Legacy by Heather Ann Thompson is remarkably familiar even though I knew almost nothing of Attica but the fact the uprising happens (it reminds me both of countless other prison scandals, not to mention every prison film Warner Brothers ever made). Thompson does a good job chronicling how a guard/prisoner clash exploded into something bigger, with convicts seizing part of the New York state prison and demanding changes (factoid: you got one roll of toilet paper a month). That in turn led to a brutal assault by state troopers, fueled by inaccurate stories of atrocities (multiple survivors testified that the prisoners, with a couple of nasty exceptions actually treated them square; the injuries and deaths were overwhelmingly from the police assault), Governor Nelson Rockefeller’s conviction this was part of some communist conspiracy, and outright racism against the black prisoners. In the aftermath we got both a state cover-up (Thompson says two archives she stumbled across were yanked from the public record once the state realized they were available) and the “blue wall” as state troopers destroyed evidence and tried intimidating pathologists and undertakers into lying. Gripping (it bogs down a little in the court hearings) but very downbeat: Thompson tries to find some sort of light in the dark, but she concedes the long-term effect of the uprising was to inspire more politicians to get tough on crime.

After that, some less horrifying reviews—

XMEN: The Shattering(various artists and writers) is a late 1990s collection in which Xavier suddenly disbands the team in the wake of the big Onslaught story arc. That leaves various X-Men forming a new team to go up against Death (an agent of the mutant Apocalypse) while some of the women party down with Mystique. Mostly reminds me why I rarely read 1990s X-books: endless internecine struggles and team reshuffles, uninteresting villains and lots of sound and fury signifying nothing.

EARTH 2: The Helmet of Fate by James Robinson and Nicola Scott is an unsatisfying follow-up to the first volume in this series, which I thought was one of the better New 52 series. Here we have multiple plotlines seeded and one main arc involving Dr. Fate and his archfoe Wotan—nothing really bad, but nothing catches fire except Hawkgirl, who seems to have the Batman slot as ace detective in this line.

TEEN TITANS: Our Right to Fight by Scott Lobdell and Brett Booth is the first in the New 52 series and certainly better than the later Light and Dark. Here Tim Drake is now an ex-Robin, recruiting a teenage team against the Men From N.O.W.H.E.R.E., who are intent on capturing “the next generation of superhumans” (though that doesn’t have much punch, given even the adult heroes in the New 52 are all under 25). I give Lobdell points for borrowing from Grant Morrison’s classic Doom Patrol run (both the Men from NOWHERE and Danny the Street—though that only goes to show that Lobdell ain’t no Morrison), but the New 52 Superboy is one of their worst reboots, the Vision without the charisma, sense of fun and sparkling wit. 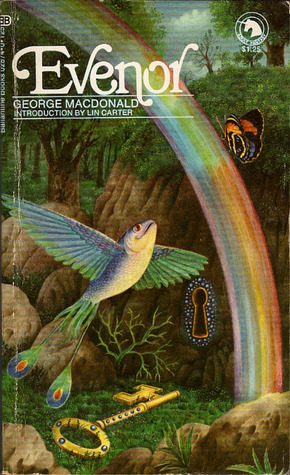 EVENOR was a Ballantine fantasy collection of three George MacDonald stories, the longest of which, unfortunately, is the worst. The novella The Wise Woman is classic Victorian didactism, with the eponymous protagonist showing how to deal with spoilt little children, and making a very heavy-handed lesson of it, despite occasional flashes of McDonald’s flair with magic. Carosyn is much better, a traditional fairy-tale romance in which a young boy encounters the fairies and sets out to save a young girl from them. The third story, The Golden Key, has two children hunting for a door to fit a magical key, and is easily at the level of McDonald’s classic Lilith. Worth reading, but best to skip the first tale. Cover by Gervasio Gallardo, all rights reside with current holder.