For the first time in a couple of years, I can binge on Christmas movies this month instead of sharing space with time-travel material. Woo-hoo! Two of the  movies this week belong in the bring people together subgenre of Christmas films: Christmas is simply an excuse for a lot of people to be together in the same place at the same time.

Case in point The Best Man (1999) brought a group of college friends back together for a wedding, but Christmas serves just as well in 2013’s BEST MAN HOLIDAY. It’s fourteen years later and the cast of the first film (including writer Taye Diggs and pro football star Morris Chestnutt) has a big Christmas reunion, which leads to them dealing with career collapse, celebrity, cancer, pregnancy, adultery and parenthood. Not a standout, but watchable, and I don’t require much more in December. “He can get married again, but not to her.” 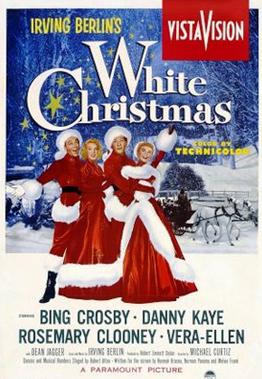 Likewise WHITE CHRISTMAS (1954) has a plot that could as easily have been made into, say, July in Vermont: entertainment duo Danny Kaye and Bing Crosby wind up at their former CO’s inn, realize he feels over-the-hill and useless (not to mention the inn is struggling) and launch a scheme to rebuild his confidence and boost bookings. Meanwhile Kaye conspires to nudge his partner into a liaison with pretty nightclub entertainer Rosemary Clooney, while himself falling into the arms of Vera Allen. But of course, would July in Vermont be watched half as much as a Christmas film? Some great dance numbers and good songs (“White Christmas” itself, for instance) but “What do you do with a general?” is not one of them. And a production number that includes nostalgia for minstrel shows makes me wince a little. Still, overall this is good, old-fashioned entertainment. All rights to image reside with current holders  “If there’s one thing I learned in the army it’s to be positive—especially when you don’t know what you’re talking about.”

Now the non-Christmas duo—Surprisingly, RUDOLPH AND FROSTY’S CHRISTMAS IN JULY (1979) puts two of the best-known Christmas characters into a film set, yes, in July: Rudolph, Frosty and the latter’s family leave the North Pole to help out a struggling circus, which gives the evil sorcerer Winterbolt a chance to snuff out the light in Rudoph’s nose, the last remnant of the magic that kept Winterbolt imprisoned for centuries. This might have worked as an hour special, but at ninety minutes (probably two hours with commercials when first aired) it feels very padded (the circus stuff in particular). However it is interesting to see Rankin-Bass throw in added continuity from Frosty’s Winter Wonderland, Rudolph’s Shiny New Year, and Santa Claus is Coming to Town (makes me wonder they didn’t work in Peter Cottontail or the Winter Warlock). “Darker, darker, grimmer, grimmer/Let Rudoph’s nose/Lose it’s glimmer!”

SNOW DAY (2000) wasn’t actually a Christmas movie, only a winter movie: when the eponymous event hits, weatherman Chevy Chase has to outperform a TV Weatherman of Evil to keep ratings up, wife Jean Smart finds herself cut off from the office and their kid and his friends hope that just once they can gum up the snowplow long enough to get two days out of it. Bland, though I’m obviously not the target audience. “Is it true what they say about running over kids with your snow plough?”

NOEL (2004) is in the second subcategory, using Christmas joy for a contrast with the characters’ loneliness and despair, with the lonely and despairing including Susan Sarandon (mother has Alzheimer’s), Penelope Cruz (boyfriend is violently jealous), Paul Walker (boyfriend in question), Alan Arkin (loonie with a tragic past) and Robin Williams (despairing priest). Nowhere near as deep or poignant as it imagines, but again, watchable. “He didn’t give you a cock-and-bull story about being my reincarnated mother, did he?”

TWILIGHT ZONE: Night of the Meek was a second season episode that fits into the second subgenre but also the third (movies that are actually about Christmas—because for me, any movie where Santa Is Real qualifies). Art Carney plays a drunken department-store Santa who stumbles across a sack in the street, then discovers that whatever people ask for, he can find inside it …I’ve seen it several times, and it’s still remarkably effective. “Just once, on Christmas, I’d like to know that the meek really do inherit the Earth.”

One response to “Time for Christmassy Movies! (#SFWApro)”