Is Our Writers Learning? Sorcerer to the Crown by Zen Cho (#SFWApro) 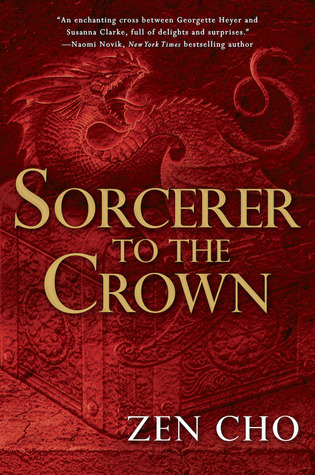 SORCERER TO THE CROWN by Zen Cho would have gotten an almost completely glowing write-up here if I’d written this a couple of days ago. Now that I’ve had time to think on the book, it’s slightly less glowing—but don’t get me wrong, I still enjoyed it immensely (cover by Eric Williams, all rights remain with current holder). There will be spoilers — you’ve been warned (sorry, but I can’t say what I learned without discussing the ending).

The setting is Britain during the Napoleonic wars, probably around 1800. Magic works, though by common pact with France, wizards stay out of the war. One of the two protagonists, Zacharias, is the new Sorcerer Royal, and he’s also an emancipated slave, bought by the previous sorcerer, Sir Stephen and emancipated due to his innate talent. When things go wrong (England’s facing a decline in magic due to issues in Fairyland), it’s very easy to blame Zacharias as he’s Not a Real Englishman.

Early on Zacharias’ friend Rollo gets him to make a speech at a girl’s school where young ladies with magic are trained to suppress it (unwomanly, don’t you know). One of the girls, Prunella, is half-Indian and has a magical inheritance from her father, so she dragoons Zacharias into helping her exploit it. That includes finding a way to marry rich, because Prunella knows the only way the Royal Society won’t just steal her inheritance (three familiars) is if she acquires enough standing in society they can’t touch her.

WHAT I LEARNED: The most interesting lesson is Cho’s handling of race, gender and class (which is part of what inspired her book). Zacharias is always conscious of his black skin, how it sets him apart, and how it makes him a target. He’d be having problems anyway, but being black makes them worse. Prunella confronts the narrow options for women and resolves to smash through the glass ceiling; it works much better for me than many stories of 19th-century women rebelling, probably because Cho deals with the system, not just Prunella’s personal dream (and maybe because Prunella’s willing to plunge into the marriage mart rather than avoid it). And as Luther Siler points out, the whole structure of British magical society involves ignoring that ordinary folks routinely throw magic around, including women (much as countless lower-class women working didn’t shake the era’s view that women didn’t work).

At the same time, none of this bogs down the book (contrary to the anti-social justice theory of specfic). It’s fun, lively, full of vivid characters and magical scenes.

•Don’t lose hold of POV. I think Cho may be trying for a Jane Austen style omniscient viewpoint, but it feels at times like she’s just switching from one third-person viewpoint to another within the middle of a scene. If I hadn’t liked the book so much, I’d be citing the sloppy POV shifts as a major flaw, but I like it enough to live with it.

•Don’t strain to keep secrets. It turns out that Rollo, the guy mentioned above, is one sorcerer’s familiar. This is a big ending reveal, and it doesn’t make sense: Zacharias knows this but none of his POV scenes refer to Rollo as anything but a flippant fop. That’s just cheating. Likewise the discussions of familiars somehow always avoid, even in internal monologue, revealing that familiars get your soul when you die. In hindsight that’s also implausible, just setting up for another big reveal.

•Magical magic does have drawbacks. Cho’s vague, undefined thaumaturgy feels much more magical to me than formal “magic systems” like the one in, say, Alloy of Law. However as Sanderson says, not understanding how the magic works weakens the plot. Magic seems plentiful and (in Prunella’s school, for instance), quite effective, so what difference does the decline make? Why can’t sorcerers manage without familiars and keep their souls? Clarifying those points would have made the stakes clearer.

•Killing an innocent does not a hero make. At the climax, Prunella saves Zacharias from having his soul slowly eaten by letting his familiar devour one of her familiars, Nidget, instead. Familiars fall somewhere between a loyal servant and a trusted pet and coldbloodedly killing it just felt wrong. Really wrong. It doesn’t fit the light-hearted tone of most of the book, and I don’t think “I must save Zacharias, I love him!” justifies it (it’s closer to Yuno’s cold-blooded killing for her boyfriend in the anime Future Diary). Maybe it’s setting up to make Prunella darker in later books, but at this point it feels like Cho misstepped.

Filed under Is Our Writers Learning?, Reading

4 responses to “Is Our Writers Learning? Sorcerer to the Crown by Zen Cho (#SFWApro)”