11-22-63 (2016) was Hulu’s streaming adaptation of Stephen King’s Save JFK With Time Travel novel, which wrapped up four days after I finished the book (I’ll add in the ending in proofs). James Franco plays a man who travels back to 1960 through a time tunnel in Chris Cooper’s diner pantry (a nice quirky touch, if hardly original) so that he can determine whether Oswald shot Kennedy; whether he acted alone; and if so, to stop him. This spends way too much time on the details of the assassination and the conspiracy theories, plus stock details such as a stereotypical Psycho Abusive Husband; I did like the outcome when Franco returns to the future, but the enigmatic time traveler who sets him straight raises more problems than they realize (from reviews of the book, they seem to have complicated things when they simplified some of King’s original plot). And now I’m truly done. “Do the words 9-11 mean anything to you?”

VIXEN was a one-shot animated special on the CW website, showcasing the African-American superhero (who later appears on Green Arrow) as she discovers her origins and teams up with Flash and Green Arrow. Not a standout, but tying it in with the overall DC TV mythos gives it more interest. However in punching up her magic talisman’s African roots, it just makes it seem weirder that the way to use them is to fight crime in the United States. “Cisco’s been calling you Vixen—that is, if I knew anyone called Cisco, which obviously I do not.”

IRMA VEP (1996) is a French backstage-film drama in which a down-on-his-luck director casts Maggie Cheung (as herself) as the star of his remake of the silent crime drama Les Vampires. This has some good scenes, but mostly it bored me (if you want a French behind-the-scenes film, try Truffaut’s classic Day for Night). “I thought Catwoman was cool.”

Somehow I’d never have guessed Akira Kurosawa’s first film was a sports movie, but SANSHIRO SUGATA (1943) is a judo film in which the eponymous champion finds himself ambivalent about his next match against an over-the-hill sensei after discovering how cute the man’s daughter is. I’m inclined to say I can see traces of Kurosawa’s style in this, but then again I don’t know I’d see that if I didn’t know it was his work. Not without interest, but not that much interest either (of course large chunks of it are now lost, which doesn’t help). “He’s not going to die. He’s thinking.” 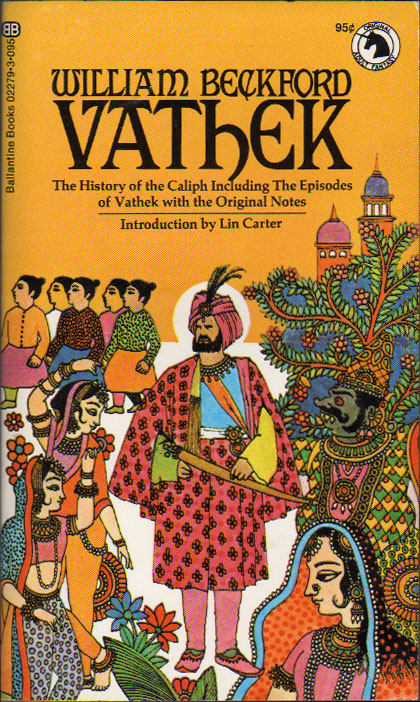 VATHEK by William Beckford (cover by Ray Cruz, all rights with current holder) was a 19th century Arabian Nights fantasy about the goodhearted but sybaritic Caliph Vathek who’s seduced by an agent of darkness and his own power-hungry mother into becoming a multiple murderer who ends up damned to eternal torment (not a spoiler, it’s foreshadowed early on). The Ballantine edition I have was the first to include three stories that other damned souls share with the caliph about how they wound up in the clutches of Eblis (Beckford left them out of the first edition when he had to rush it out to secure copyright).  As Lin Carter notes in the intro, it’s easy to see the influence on Clark Ashton Smith, and also I think, Lovecraft (the cyclopean underground realms now seem very Lovecraftian).

THE SECRET LIVES OF DOGS: The Real Reasons Behind 52 Mysterious Canine Behaviors by Jana Murphy answers such longstanding questions as why dogs lick feet (lots of odors and they smell like us), why they like sleeping in human beds (the desire to be with the pack, the smells, and the height) and why they like to chew sticks (exercises the jaws). Much of this I already know, but as I picked it up discounted, it was worth it (and the bits I don’t know are proving useful)

Filed under Movies, Now and Then We Time Travel, Reading, TV

4 responses to “One final bit of time travel (#SFWApro)”