I hope today is not foreshadowing for February (#SFWApro) 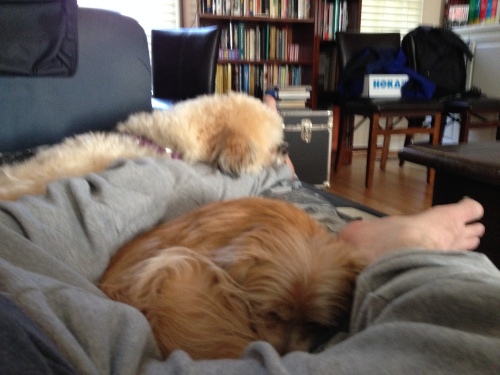 So last week we ran out of our dry dog food and switched to doggy stew for about three days. Such a complete switch apparently upset their systems and there were some indoor pooh problems. And Trixie, TYG thought, seemed uncomfortable, as if her tummy was hurting.

Then the past couple of nights, even though we’ve had them back on kibble, she’s been running around nervously in the middle of the night, desperate to get out before she has another accident. Last night I had to take her out three times, which was not very good for my sleep pattern. Plus the last couple of trips she spent so much time walking around I wonder if it was really a physical need or more “Oh, now I know how to make Daddy take me out so I can chase the invisible fairies I know are out here!”

In any case, this morning we took her into the vet (who’s only about five minutes away). The vet got us some meds and orders not to feed Trixie until late this afternoon (Trixie’s pleading eyes followed me when I gave Plushie his lunch and not her), and then only a little.

Hopefully it’s just a minor stomach problem and nothing serious. And hopefully we’ll both be sleeping soundly tonight.

EDIT: Almost forgot to add that the vet confirmed Plushie is down to the weight we wanted so the diet worked. Now I guess we can give him a little more so he stays where he is (15 lbs).