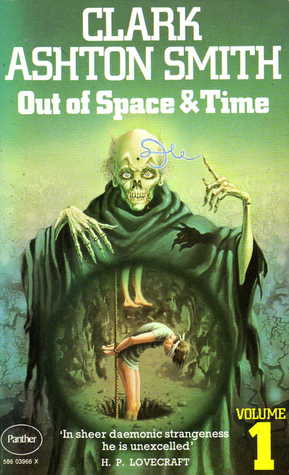 Several weeks worth, actually … OUT OF SPACE AND TIME is the first half of a reprinted Best Of Clark Ashton Smith collection that Smith picked himself back in the 1940s. This half includes several Averoigne tales, plus Poseidonis, Zothique and several modern set (though frequently sliding into other realms). A good collection, with “A Night in Malneant” particularly effective—I don’t know if Smith intended it as a metaphor for losing one’s wife, but now that I have one to lose, it sure feels like i. A shame I don’t have Vol. 2 (all rights to cover image with current holder)

THE MERMAN’S CHILDREN by Poul Anderson reminds me a lot of The Broken Sword in it’s bleak, Scandinavian, doom-laden tone: the protagonists are half-human, half-merfolk, scattered from their home as Christianity grinds away at the world of faerie, setting them hunting for a place to call home in a world increasingly unfriendly to magic. Surprisingly, the ending is upbeat for everyone, and not implausibly so—I guess Anderson meant it when he said he couldn’t have written Broken Sword as an older writer.

It’s been a while since I read Peter Wimsey, but I’m back on track—GAUDY NIGHT by Dorothy Sayers actually focuses on Peter’s dream girl Harriet Vane, as her college asks Harriet to discreetly investigate who’s been sending poison-pen letters to the staff and targeting them with other cruel pranks (as a writer I must say that destroying someone’s corrected proofs is particularly nasty). Inevitably, she has to call in Lord Peter, which requires dealing with their complicated, awkward relationship. Unfortunately much like Nine Tailors, Sayers isn’t as interested in the mystery as the college (she’s an Oxford grad herself) so get lots of long, tedious discussions about academic life, whatever-became-of-, friendship, and an educated woman’s place in the world . It’s not as bad as Pamela Dean’s Tam Lin but it is a low point for the series.

UNBOUND: Book Three of Magic Ex Libris by Jim Hines is another disappointment (I liked both Libriomancer and Codex Born). It start of well with Isaac shell-shocked and depressed due to the outcome of Book Two, plus a spectacular heist sequence (robbing a vampire blood-bank in orbit!), but before long it’s just drawing-room fantasy—people sitting around, talking about what to do, talking about how to stop the bad guy, talking, talking, talking … and while Isaac is powerless here, when he has two top-flight sorcerers covering his butt, the tension is actually less. However I will give Hines top marks for not crapping out on the release of magic in the world at the end of Codex Born and following up on that here—the SF con discussing what this means for fantasy fiction was a hoot.

THE PAST IS A FOREIGN COUNTRY by David Lowenthal looks at the various ways we relate to the past (as a guide to our present-day lives; as a source of rules for How Things Should Be; as a barbaric era we’ve risen above), how those have changed over time or been debated within a given time (is Great Classic Art a millstone around our necks or a shining beacon of inspiration?), how we preserve relics of the past and ultimately what we’re to make of it (“As we see different historical eras as distinctive, we also lose the sense of a grand sweep of history leading to the present.”). I picked this up mostly for a discussion of time travel and different reasons to visit the past (change history, gain wisdom, exploit your future knowledge etc.); in its own right, good and interesting but very dry.