Wondering About the Wonder Family (#SFWApro) 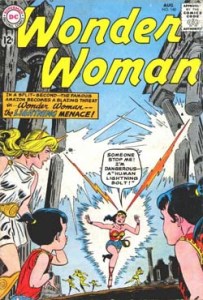 The first of these stories showed up in the previous volume, allegedly in response to readers asking to have Wonder Girl and Wonder Tot (Wonder Woman’s teen and child selves respectively) team up with her. As the Amazon actually read letters to the DC comic (a common shtick in writer Robert Kanigher’s super-hero books), they obliged by using trick photography to combine all three ages of Diana in one story, as if they were siblings. Hippolyta, who participated in most of the adventures, was Wonder Queen.

Apparently fans liked it, or Kanigher did. Roughly three-quarters of the stories in Vol. 3 are Wonder Family tales. That includes a number of what would normally be Wonder Girl stories that instead work the Wonder Family in as supporting cast (likewise WW 155 is a straight Wonder Woman story that uses the family in supporting roles)—even though they thought Wonder Girl popular enough that she got equal billing with WW on a couple of covers. 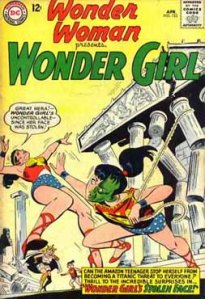 While the first couple of Wonder Family stories emphasized they were imaginary tales (i.e., not part of “real” continuity), this volume doesn’t bother. They’re presented matter-of-factly as if Diana really did have siblings (it’s generally assumed this is what gave the creators of Teen Titans the idea Wonder Girl was a separate character they could add to the book).

So did sales go up with the Wonder Family in stories? Certainly they offered something different from the usual—no secret identity games, not as much romance as the regular WW stories, and more focus on the Amazons. And I can imagine the idea of three super-powered sisters and their super-mother could appeal to readers.

Or maybe sales stayed the same but Kanigher liked the idea. It certainly offered something different from the usual super-heroic stories, and he’d been writing Wonder Woman for around a decade. Perhaps it was refreshing.

That being said, the last story in this collection, “Brain Pirates of the Inner World” turned out to consign the Wonder Family to the scrap heap. It’s another imaginary story in which Diana reads an old Wonder Woman comic and finds herself reliving the adventure. Artists Ross Andru and Mike Esposito drew it as close to the classic Harry Peters style of the early WW as practical, Kanigher reintroduced the Holliday College sorority girls (he’d used them occasionally, earlier in the sixties) and Queen Hippolyta was back to brunette.

The story implies the guy selling the old comics has some kind of mindwarping power, but he didn’t take. The Golden Age aspects apparently did — about two issues later, Kanigher would go retro with the series and ditch the Wonder Family and most of his other creations (if you want to see how he approached that in the book, comics researcher Brian Cronin has the details).

I’ll talk more about that when I finish Vol. 4, which wraps up the Silver Age WW.

(covers by Andru/Esposito, all rights with current holder).

4 responses to “Wondering About the Wonder Family (#SFWApro)”