Which is to say, plans don’t always work out, as witness today …

I got a call from TYG while she was walking the puppies this morning, which was a little alarming: she usually texts unless there’s an emergency. It turned out she and the dogs had encountered a shiba inu running loose; as there was no owner in sight, she wanted me to bring a leash so we could hold her in the back yard until we could find the owner. We didn’t want to take him inside because who knew how he would react to us, or the dogs, or …

So we put him on the deck with water and food, shut the garden gates, and posted to various local forums. After a couple of hours we called the Durham shelter because it was getting hot outside, and we figured they could read his microchip if he had one. The owner did call in the afternoon, so I steered her to the shelter.

Anyway, all of that used up a surprising amount of time, running to find TYG, walking the dog home, figuring out what to do, recovering from going off schedule (I don’t reset easily) … so my morning was largely shot.

Fortunately yesterday we took the dogs to puppy day care for the first time, so I had the whole day to myself. Despite the 40 minutes or so to take the dogs there and back, this was very productive. It’s not just the time I don’t spend walking them or feeding them or petting them, it’s … I don’t know, there’s just a surprising amount of focus drained by having them around. Worth it, of course (see pictures below for how adorable they are) but definitely a fact. 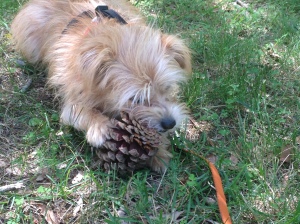 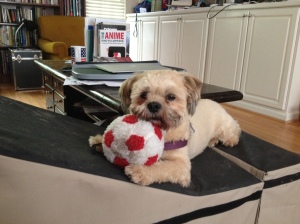 So we’ll probably doing a lot more doggy daycare. And it was a good thing this week because the work was intensive enough I still made my 40 hours despite today’s distractions and a contractor we had to have in on Monday (nothing major).

So I faced the unexpected and for once I came out ahead. Pretty cool.

Filed under Personal, The Dog Ate My Homework, Time management and goals, Writing