How not to do satire 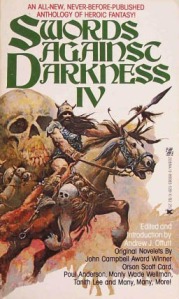 Given the repeated “problematic” stories in Andrew Offutt’s old Swords Against Darkness anthologies (case in point) I wonder if I’d pick them up today if I didn’t already have them (all rights to image with current holder; I don’t know the artist).

While Volume Three was problem-free, Swords Against Darkness IV, which is overall a good collection (details on the good stuff in this weekend’s reviews), does unfortunately also boast “Of Pigs and Men,” a satirical essay by SF great Poul Anderson taking on “the current furore over persecuted minorities and how society has got to make it up to them for the troubles their ancestors endured.” Offutt rates it as a stroke of genius and the best thing Anderson has ever done; I’m less enthused.

The premise is simple: WASPs are the true victims of persecution, though Anderson redefines them as PIGS (People Inhabiting Germanic Settlements). Attacked by Native Americans who valued “property rights over human rights.” Tromped on by Mediterranean oppressors from the Roman Empire to Napoleon. Stuck with insulting names such as “gringo” or the Chinese “foreign devils!” Tricked into buying Manhattan from people who didn’t actually own it. And yeah, occasionally buying slaves from all those Africans who were doing a roaring trade in the slave business.

I was going to cut Anderson a little slack—maybe he was responding to the more radical voices of the 1970s (this was a 1979 collection) rather than civil rights in general—but this is a reprint of something he wrote a decade earlier. And since he chooses not to specify, I see no reason not to assume he’s dumping on civil rights in general (or more precisely, on the movement’s criticisms of white America). After all he does think an observation that “yeah, white people bought a few slaves, but black people sold them first!” is witty.

The point of the essay, to the extent it has one, appears to be less really claiming white people are oppressed but that claims about how any particular group has suffered horribly are just silly. It’s history. History is all about oppression. If blacks and Native Americans can claim they’re oppressed, well so can PIGS, so there (conveniently, PIGS include Jews and Catholics, or at least “many” of them … but no nonwhites. Boundaries are drawn)

Except that doesn’t work. Okay, it works if the argument is that all through history, white people have been the bad guys and natives everywhere were noble savages. Just about everyone’s got blood on their hands over the centuries.  But while some nonwhites have made the White People Suck argument, most of the civil rights movement focused on relatively recent history. You know, like slavery, and then Jim Crow, and the willingness of many white people to use murder and terrorism to preserve white supremacy? Did Anderson seriously imagine those didn’t still affect the lives of blacks at the time he wrote? Or did he just not want to hear it? Because the line about slavery seriously undercuts the satire. He’s not joking that “yeah, well lots of people had slaves so why single Americans out?” (there are plenty of reasons, particularly the racial aspect, that made British and then American slavery worse than many cultures, but that’s a separate argument), he’s joking that American slavery is really no big deal. Nothing to see here. Move along. So possibly he doesn’t feel as sanguine as the column implies.

Likewise, holding up “foreign devil” and “gringo” to show how badly PIGS are treated is baloney. I’ve heard plenty of people, even today, write about how much the n-word bites (and as the recent controversy over the Washington Redskins has shown, plenty of other groups have their own stinging labels). I don’t believe for a minute that anyone, including Anderson, was ever hurt by “foreign devil” or “gringo” (maybe offended by the disrespect).

Brilliant is definitely not the word I’d use.

4 responses to “How not to do satire”