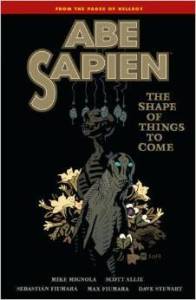 ABE SAPIEN: The Shape of Things to Come by Mike Mignola and multiple illustrators (cover by Mignola, rights with current holder) has Abe continue his wanderings over the apocalyptic landscape only to discover that for all his talk about walking away from the monster-hunting lifestyle, he can’t quite overcome his reflexes. Good; I particularly liked the way so many people in this book (as opposed to the previous volume) accept Abe matter-of-factly rather than freaking out. I’ll have this added to the Hellboy Chronology by the end of the weekend.

THE GAME by Izzy Abrahimi is an oddball novel in which a bored couple make up a game played by scoring what they see in the apartments across the street (do you see people reading? Kissing? Is anyone black or in a uniform?) only to have their constant watching trigger initial paranoia, then a wave of voyeurism (“I’m not a Peeping Tom any more, it’s become mainstream.”), commercialism (“My wife’s been comparing our apartment to the ones across the way.”) and moral questioning (‘If you see two people kissing, I think you should lose points!”). Normally I hate novels that identify people as The Guy on the Balcony and the like but it worked with this one.

Depressingly THE MOMMY MYTH: The Idealization of Motherhood and How It Has Undermined Women by Susan J. Douglas and Meredith W. Michaels hasn’t become any less relevant since it came out a decade ago. The authors argue that second-wave feminism, despite right-wing stereotypes about feminists hating families and marriage, was actually strongly pro-mother: pointing out how much it would cost to hire a household staff to do the same work, calling for daycare and better child support policies and making it easier for women to balance jobs and children (which by the standards of some right-wingers is, of course, a hideous attack on women’s true place—working women being eevil). Since then, right-wing backlash against daycare, maternity leave, paternity leave and such has made things harder for women, and media fetishization of motherhood creates an insane standard. The authors devote a great deal of space, for instance, to Celebrity Mom stories in which actors tell how nothing in their lives has ever compared to motherhood and how getting up at 3 AM to clean up baby’s vomit fills them with joy. A good analysis.