First the non-: RADIO FREE ALBEMUTH (2014) adapts a Philip K. Dick novel wherein a record producer receiving  mental transmissions from a god/parallel universe/orbiting satellite becomes convinced he’s getting guidance on how to overthrow the repressive U.S. government. With a little tinkering, this would have made a great parody of conspiracy theory, but it’s supposed to be taken straight, which makes it come off idiotic (the supposedly brilliant protest song the protagonist tries getting on the air doesn’t seem like it could take down a city council, let alone the US). While this is described as a parallel universe (it’s 1985, but clearly not the one we lived through), it doesn’t qualify for the book (if it did, so would Watchmen and god knows what else).“Silver eggs that give immortality to their followers—Jesus spoke about that in the Bible several times.”

ENTER THE VOID (2009) starts off with two minutes of some of the most annoying graphics imaginable, then follows up with a movie that’s 90 percent a Pretentious Surreal Drug Trip with delusions of grandeur (the low-budget The Trip had more entertaining visuals). Although the protagonist spends a lot of time in his flashback booth, there’s no actual travel to the past, so it’s a no-go.“It’s just a drug, it can’t hurt you.”

LIMBO (2008) is a Mexican Twilight Zone-ish film in which a gay teen apparently dying from an accident wakes up in a mysterious hospital That’s Not A Hospital where the only other occupants are a suicidal lawyer and a tart-tongued nurse. Can the teen  figure out what he’s doing there? What any of them are doing there? Competently done, but not clever enough to stand out. “There is only one door separating limbo from hell—you should remember that.”

I caught THE ADVENTURES OF MICKEY MATSON: The Copperhead Treasure (2012) because the McGuffin the eponymous teen is hunting could supposedly alter the outcome of the Civil War. However that’s not because of time travel but because the villains don’t believe the war is over and want the McGuffin so they can finally claim victory. Uninspired kidvid with Christopher Lloyd in a brief part as the hero’s grandfather. “You don’t scare me—I’m from Chicago!”

Stuff for the Appendix:  GALAXYQUEST (1999) is, of course, the story of how the stars of the legendary SF series Galaxyquest (Tim Allen, Sigourney Weaver, Tony Shalhoub and Alan Rickman) are recruited by aliens who think the series was a documentary and can’t imagine more valuable allies against the local tyrant. This idea goes back at least to the 1950s, but this is the best rendition I’ve seen, well executed and well acted—but the time-travel only qualifies this for the appendix where all Last Minute Saves By Time Travel go. “Maybe you’re the plucky comic relief.”

The same is true for FLIGHT OF THE NAVIGATOR (1986), a charming Disney film in which a young boy tries to figure out why a few hours wandering in the woods have brought him home eight years later. It turns out he’s mentally linked to an alien vessel super-scientist Howard Hesseman is studying, and the kid and the ship have to bust out together. With Sarah Jessica Parker as a helpful nurse. “He said he wanted to phone home.”

Now the qualifieers— SLIPSTREAM (2005) stars Sean Astin as an obnoxious  federal physicist who uses the title time-rewinding device to survive a bank robbery only to find things going out of control when both an FBI agent and the head robber get caught up in the do-over. The device is close to a McGuffin and not logical even by subgenre standards (it fudges whether it’s a mind-transfer or a physical transfer), but it’s entertaining, though the happy ending doesn’t quite convince. “It’s not a time machine, it’s a polydimensional translocation device.” 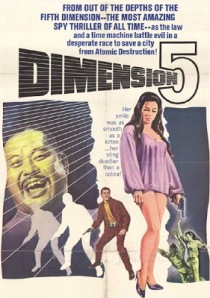 DIMENSION 5 (1966) stars Frances Nuyen and Jeffrey Hunter as super-agents out to stop the Chinese Communist spy network, the Dragon (with Harold Sakata, AKA Oddjob, as one of the leaders) from nuking Los Angeles to force the US out of Southeast Asia. What qualifies it for my book is that one of their cool spy gadgets is a time-travel device that allows them to shift anywhere from 30 seconds to couple of months into the past or future. Despite the efforts to think the implications through (no killing people in the past to avoid the butterfly effect) they fail—at one point after they’ve gone into the future, Hunter claims that after they return home, they’ll have to relive the experience in the regular timeline, which makes no sense. Not great as a spy movie or SF, but I’ve certainly seen worse. “The laws of gravity are not only deceiving, sometimes they’re downright ridiculous.”