And the other time travel movies … (#SFWApro)

BEN 10: Race Against Time (2007) was a live-action adaptation of the cartoon series, in which Ben (the kid who can turn into super-powered aliens) finds himself up against the time-traveling alien Eon who plans to pull his people out of their doomed world to Earth’s present, but needs Ben’s omnitrix to do it. Like a number of children’s films I’ve watched for this book, it’s hard for me to get into the emotional arc here—the big finish isn’t Ben beating Eon but performing in the school talent show, for instance. But it’s not their fault I’m no longer a child. Robert Picardo and Lee Majors are among the cast “I’m sorry about that detention—I didn’t want to blow my cover.”

SHREK FOREVER AFTER (2010) has Shrek beginning to wonder if he’s cut out for a life of changing diapers, friends constantly intruding and being held up as a celebrity rather than a terrifying monster—all of which makes it easy for Rumpelstiltskin to trick Shrek into erasing himself from existence (“The day you took from me was the day I was born, right?”). This tries to milk the usual humor from the alt.versions of the characters (Fat Puss In Boots!) and the usual Why Do You Say YouKnow Me? confusion, but the series formula is clearly as played out here as in Goldmember. As typical for a parallel-world/alternate personal history story, the moral is that you have a wonderful life so stop thinking the grass is greener somewhere else. “How’s that for a metaphysical paradox?’ 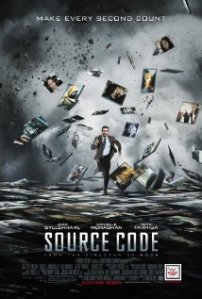 SOURCE CODE (2011) has Jake Gyllenhaal trying to figure out how he went from being a downed soldier in Afghanistan to a commuter flirting with Michelle Monaghan and dying over and over when a bomb destroys their train. The answer, he learns, is that he’s being used in a mad science experiment to identify the terrorist responsible by entering a quantum alternate reality created by one victim’s dying memories. As you may be able to tell the science here is specious even for time-travel, but I like the film (though the end of the ending didn’t work). Former Quantum Leaper Scott Bakula makes a voice cameo as Gyllenhaal’s father. All rights to image with current copyright holder. “I’m going to press redial, your phone is going to ring, and I’m going to shoot you.”

STAR TREK: First Contact (1996) has the Enterprise discover resistance really is futile when a Borg attack on Earth turns out to be an attack through time, leaving Earth with a population of nine billion Borg and nothing else. So it’s back to the apocalyptic ruin of the mid-21st century where James Cromwell is unwittingly about to make first contact with Vulcan, unless the Borg stop him first. Very good as Picard deals with his own past history with the Borg, but the introduction of the Borg Queen (Alice Krige) never worked for me—I prefer the Borg as a completely uniform hive-mind because it’s so much more alien. With the regular Next Generation cast, plus Robert Picardo as a holo-doctor (“According to Starfleet medical research, Borg implants can cause extreme skin irritation.”). “And you people are all astronauts on … some kind of star trek?

2 responses to “And the other time travel movies … (#SFWApro)”