Say You Want a Revolution: Doc Savage in The Majii and Dust of Death (#SFWApro)

As I’ve mentioned in earlier posts in this series, Doc Savage had a global reach denied to pulp adventurer such as the Shadow or the Phantom Detective. To date we’ve had one attempt to invade America (Red Snow), one attempt to take over a European nation (The Kingmaker), and two third-world takeovers (Pirate of the Pacific) and The Mystic Mullah). This month he gets to save two more countries. 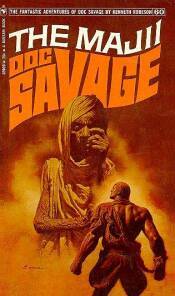 Curiously, the kingdom of Jondore in The Majii (located on the borders of India) is described as having a population comparable to the United States. That’s unusually large—normally fictitious countries are postage stamp kingdoms, and that would be a very large stamp.
The book reads like a reworking of The Mystic Mullah. The Majii is a centuries-old, supposedly immortal mystic leader with unbelievable supernatural powers, much like the Mullah. While the first book had the creepy soul-snakes, the Majii’s powers are actually scarier, starting with the first chapter. His disciple, Rama Tura, simply stares at a couple of adversaries and mind-controls them into shooting their own heads off.
Rama Tura is performing miracles—turning fake gems into real ones—and selling them to raise money for charity. A wonderful fellow, except people who photograph his performances turn up dead. Oh, and partway through the book, someone robs the bank holding the charity’s cash in a safety deposit box. Yes, he’s dirty.
Like countless other pulp and movie villains, the Majii is plotting to overthrow British rule in Jondore. Curiously, Dent’s description of Britain keeping Jondore under its thumb makes the British sound less virtuous than most such plots (The Drums of Fu Manchu serial for instance). Dent seemed sympathetic to the third world in Man of Bronze, so maybe this was a mild political criticism. Or maybe I’m reading too much in.
This book doesn’t really expand the mythos any, but it does establish Doc is a wizard of forensic chemistry who can analyze cotton cloth and trace it back to the mill that made it. There’s also a nice bit where Long Tom turns down a $50,000 consulting gig to stay and help his buddies.

Dust of Death, written by Harold Davis and rewritten by Dent, opens with Long Tom, having managed to snag that gig in Argentina, heading to the postage-stamp democracy of Santa Amoza where an old WW I buddy has been laid up in the hospital. Santa Amoza is at war with the neighboring military dictatorship, Delezon, and the mysterious Inca in Gray has been tilting the scales in favor of the latter. His favorite weapon is the title powder which kills at a touch.
Needless to say, when Long Tom shows up, it’s assumed that Doc is on the way, so the Inca’s men make a pre-emptive strike. Before long, Long Tom winds up in Delezon where he’s apparently shot by a firing squad. But despite the Inca’s best efforts, Doc’s on the way.
Curiously, the villains are almost colorless outside their boss. One is a trained wrestler who gives Doc some trouble going mano-a-mano, but there are none of the usual physical or personality quirks, or even the colorful nicknames like Fluency Beech or Leases Moore. Despite which it’s a solid tale, though best known for introducing Chemistry. This was Ham’s opposite number to Monk’s pet pig, Habeas Corpus. Ham stumbles upon him in the jungle and Chemistry likes him. And given the ape is a hairy, pint-size lookalike for Monk, Ham can’t resist taking him home.
One oddball note is that despite the Inca’s nom de crime, the natives that follow him are identified as Mayan.
(Covers by James Bama, rights to current holder)

3 responses to “Say You Want a Revolution: Doc Savage in The Majii and Dust of Death (#SFWApro)”