THE NEW AVENGERS: Everything Dies by Jonathan Hickman and Steve Epting is a product of Marvel’s recent soft reboot (lots of changes, no actual retcons) in which the Illuminati (a loose team of characters including Iron Man, Cap, Black Panther and Reed Richards manipulating things behind the scenes) discover that parallel worlds are crashing into our universe with destructive consequences posing the hard question—are they willing to kill other Earths to save our own? Reflecting my last post, I’ve no idea how this group constitutes an Avengers team, and even allowing for that, it has way too much posturing about making the Hard Calls. Plus the premise amounts to remaking Crisis on Infinite Earths with lots more technobabble. 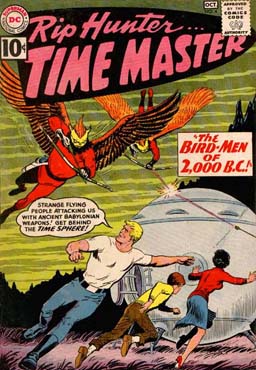 SHOWCASE PRESENTS RIP HUNTER, TIME MASTER by multiple creators was one of the weakest of DC’s non-super team books from the Silver Age (Cave Carson, Suicide Squad, Sea Devils) with the stock team of Leader, Pretty Girl, Strong Guy and Kid Brother. Rip’s time sphere allows them to travel through time, usually investigating bizarre mysteries or artifacts and discovering aliens, monsters or fake aliens and monsters. The series ran four years (Cave Carson and the Silver Age Suicide Squad never even got their own titles), but only occasionally shows a spark. Rip Hunter has, however, been showing up in comics ever since in one book or another.
CONAN: Cimmeria by Timothy Truman, Tomas Giorello and Richard Corben is an excellent entry in Dark Horse’s Conan series as the barbarian returns to his homeland and discovers love, deceit and betrayal, interspersed with stories of his grandfather Connacht’s own experiences roaming the world (Robert E. Howard said back in the day that there was such a grandfather, the inspiration for Conan’s adventures). Well written, and in some ways a rejection of Howard’s Civilization Bad/Barbarism Good views (Cimmerians prove capable of just as much rottenness as civilized folk).