Doc Savage’s aides were a colorful lot. In contrast to the Shadow, whose helpers were tough but sort-of normal, we have Monk, a brilliant chemist with a burly, apelike body; Ham, one of the country’s best dressed men; Renny, with fists the size of gallon pails; and Long Tom, who looks like he’s wasting away from disease (in reality, he’s as tough as any of the guys). The only one with no really distinctive traits to this point was Johnny. He’s tall and skinny, and brilliant (but they all are); Lester Dent tried making him a gambler, but only on sure things, but that was kind of awkward.
In Mystery on the Snow, he finally gets his defining trait, an irresistible compulsion to use a polysyllabic vocabulary (cover rights to images herein lie with the current holder). It would stick with him for the rest of the series, and it was quite a surprise when I reread them to realize he went the first year just talking ordinary.
Otherwise, this one is fairly routine. Once again, a gang tries to stop Doc from helping someone and once again, they fail. Doc is off to the frozen North (Canada was a much more popular setting for rugged pulp and movie adventure than I think it is now) to help out prospector Ben Lane, who has discovered a miracle metal he modestly calls benlanium. A surprisingly plausible miracle, too, a metal that will replace manganese in steel alloys—and therefore threatens the manganese mining syndicate that wants control of benlanium.
The mystery of the title (lots of people disappearing on the snow without any trace) is pretty humdrum too. It does boast a kick-ass young lady in Canadian PI Midnat D’Avis, who can shoot and throw a punch with the best of ’em. Perhaps in compensation, she moons over Doc more than anyone to date. And in contrast to the Meteor Menace, Doc’s back to being merely stoic in the face of female interest rather than embarrassed.
A minor note is that Doc still uses his drug-tipped fingertip needles (see the Meteor Menace entry) though only to subdue a prisoner rather than in combat. 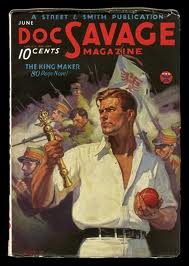 The King Maker is a livelier story, as Doc becomes embroiled in a Balkan intrigue against the last absolute monarch in Europe—but which side is really the right one? It’s not hard to guess—I don’t think revolutionaries are ever the good guys in this series; though it does strike me that a few years later, the villains would have been Nazi fifth columnists. It’s fast moving and enjoyable, if not A-list for the series—and it brings into focus the series use of what was once cutting-edge technology.
Much as I like the series, it must have seemed way cooler to any 1930s kid with an interest in science. In the series to date we’ve seen Long Tom use portable radios (radio was still cool tech) and Doc’s spied on visitors to his office (which while never named is clearly in that pinnacle of New York engineering, the Empire State Building) using television, which was very cutting edge.
In The King Maker, the revolutionaries’ ace in the hole is a mystery weapon that seems capable of blowing up boats, planes and buildings. Even when there’s no possibility of a bomb planted aboard the vessel or any way to locate it in the dark, the deadly thing strikes. Turns out it’s an “aerial torpedo” with a heat-seeking element—something fairly mundane today but light years ahead of weapons tech back then.
Happily the next two in the series are among my favorites, so I’m really looking forward to September’s installment. And it has two of my favorite James Bama covers: the paperback covers were post-Bama and comparatively dull, hence my use of the magazines (in case you were wondering).