Cartoonist Jules Feiffer once wrote that the polar opposite of the wimp who can’t get a date isn’t a lothario, it’s a man who can get all the women he wants and isn’t interested.
I’m not sure that particular image holds true, but it was certainly a common one in the 1930s (Feiffer was pointing out that while Clark Kent can’t get anywhere with Lois, Superman could but in the first few years doesn’t even try). And it’s how Lester Dent wrote Doc Savage in the first year: a manly man who melts women’s hearts but has no interest in romance (on the grounds a life of adventure has no room for dames). With Meteor Menace, that changed.
Midway through the book, Doc wakes up after a period of amnesia and discovers he’s apparently engaged to a good-looking woman. Who likes kissing him. His initial reaction is embarrassment and discomfort, which is another stereotype of the time: A manly man just doesn’t know how to deal with all that mushy stuff.
I don’t recall Dent playing that card too many times, but I must admit it works. It’s a reliable source of comic relief and shows at least one area where Doc doesn’t have it all together (in this book we learn that even his updates on the case are delivered in gripping, vivid imagery. As my friend Ross once observed, Doc probably ties his shoelaces better than any other person, ever).
The story itself is a very good one. Following the events of the last book, Doc and his gang return to Chile for the dedication of a new hospital (having grateful nations build hospitals was his standard fee for saving the government). As usual, a good guy (the female of the later embarassment) tries to reach Doc for help, and fails. Then the Blue Meteor flies overhead, turning the sky the electric blue of a welding arc and driving everyone directly under it (whatever it is) mad. It’s a really eerie weapon, all the more impressive because it reduces Doc’s aides Monk and Ham to little more than animals early on. Of course they get better, but seeing them in that state is remarkably effective.
Mo-Gwi, master of the meteor is the first criminal with genuinely global ambitions, plotting to either hold nations to ransom with his WMD or loot them after the Blue Meteor flies over.
On the downside the Tibetans (this is a very global adventure, stretching from Chile to Tibet) are largely Othered, either villains or xenophobes. Dent does put a lot more work than usual into the details of Tibetan culture, though I won’t vouch for their accuracy.
Curiously, Doc’s back to using the drug-tipped thimbles on his fingers to take guys out; the last two books, he’s been all about the nerve pinches. 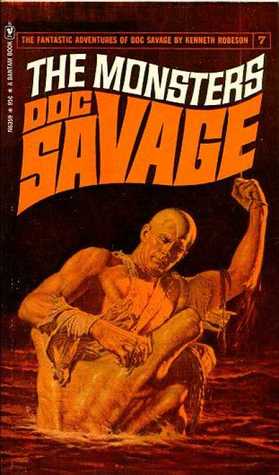 The cover illo (by James Bama, all rights reside with current holder) and back-cover copy for Bantam’s edition of The Monsters unfortunately gives away the identity of the titular menace (and now I have too, but I do think that’s a great cover). In the book itself, Dent keeps us in the dark for half the length as to what kind of destructive menace the bad guy has unleashed.
The book opens with a nice trick Dent used a couple times more, introducing someone and indicating the unwitting steps he’s taking that guarantee his death. I also like the villain’s scheme is at least half a scam: he’s counting on public outcry after his giants first attack to inflate their size and number, so that the cities he extorts money from will think he has a battalion of hundred-foot tall giants. The only real flaw is that the villain is obvious, due to how much he keeps pointing Doc to the red herring.
A good pair of series entries.

12 responses to “Doc Savage Embarrassed: Meteor Menace and The Monsters”