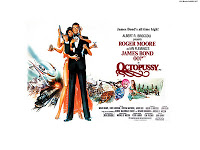 1983’s Octobpussy is good enough I wish it had been better (it’s still better than Moonraker, which ain’t saying much).
The premise makes this the most Cold War of all Bond films: Soviet General Orlov (Steven Berkoff) is a fanatical warhawk who believes he can take Western Europe in less than a week. After the other leaders (including KGB head and series regular Gen. Gogol) shut him down, his solution is to smuggle a nuke onto a NATO base and detonate it: European anti-nuke sentiment will erupt and force Americans to withdraw their tactical nukes, thereby leaving the West vulnerable to a Soviet blitzkrieg (this doesn’t make much sense—we could, after all, still nuke them—but Europe’s supposed vulnerability was a hot topic in the Reagan years).
Somehow this entangles Orlov with Kemal Khan (Louis Jordan), an Afghan prince and international criminal. The plot involves smuggling Faberge eggs and auctioning them off but it’s not really clear why (as Khan’s paying market price for them, it’s hard to see how he benefits, or Orlov). This is very in keeping with the renewed Cold War rhetoric of the day, though the movie hedges its bet by making Orlov a renegade rather than an active agent (in the end, Gogol finishes him off, rather than Bond).
Investigating the eggs brings Roger Moore’s Bond into contact with Octopussy (Maud Adams), the daughter of a rogue British military man Bond captured years before (as License to Thrill points out, this seems to set Bond at close to Moore’s real age) and allowed to commit suicide—so rather than revenge, she’s grateful. She now runs a combination smuggling ring and legit business empire. Like Scaramanga in Golden Gun, she sees them as two of a kind and gets quite indignant when Bond claims the moral high ground (his manly kisses, of course, take care of that).
Following the trend launched in Spy Who Loved Me, Octopussy is far more interesting than the villains (a kinder, gentler Sumuru), and far more central to the plot—like I said, Bond doesn’t even get to take out Orlov. Octopussy’s all-woman army attacking Khan’s palace at the climax is one of the best bits of the film, and makes me wish they’d dropped Khan and made her the prime adversary—until, of course, she learns Orlov’s agenda and switches sides.
The movie we do get has one of my favorite theme songs (Rita Coolidge, “All Time High”) and some good scenes, but too much draggy time and too much camp (Moore utters a Tarzan yell while jumping between trees in one scene). It could have been so much better.

9 responses to “The near-miss Bond: Octopussy”