A new kind of Bond girl? The Spy Who Loved Me 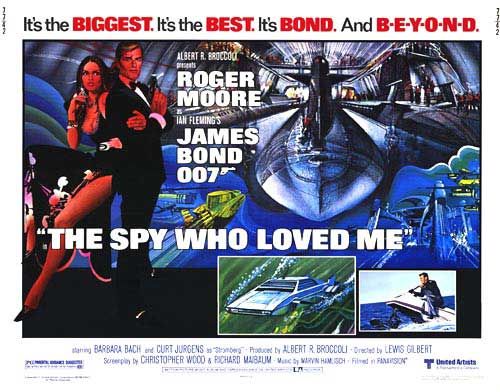 After my disappointment with Live and Let Die and The Man With the Golden Gun, THE SPY WHO LOVED ME (1977) lives up to my memories of it as the best of the Moore Bonds. And the book Licensed to Thrill has a point that it marked a shift in the way the films are structured.
Bond and Soviet agent Barbara Bach are both assigned to investigate the disappearance of UK and USSR submarines. Initially suspicious, they wind up working together after they discover the real villain is Curt Jurgens, an ocean-loving megalomaniac who plans to use the submarines’ arsenals to trigger nuclear war, wipe out the world, then rebuild (I think his plan is to set up a kind of New Atlantis underwater, but he never really spells it out). Complicating the job of taking down Jurgens is Jaws (Richard Kiel) an indestructible assassin with steel teeth. The name was a natural joke on Spielberg’s relatively recent Jaws, but even 35 years later, Kiel makes the best brute-man sidekick since Odd Job in Goldfinger. Roger Moore does a lot more mano-a-mano than his previous two films, which doesn’t hurt either.
License to Thrill‘s observation (not, the book, notes, the authors’ own idea) is that with this film, the series shifts from the classic structure of Bond and opposing villain with the Bond girl in between. Instead, the villains become increasingly generic and the woman of the picture becomes Bond’s opposite number.
And that definitely does reflect the rest of the series. Maud Adams as Octopussy is a much more prominent figure in the film than Louis Jordan’s Soviet general; while Jonathan Pryce makes a good villain in Tomorrow Never Dies, Michelle Yeoh as Bond’s Chinese ally is at least as impressive (ditto Famke Janssen and Sean Bean in Goldeneye). About the only other character I remember beside Bond from The Living Daylights is Maryam D’abo’s cellist/assassin.
And this is the movie where it starts. Bach’s introduction mirrors Bond: She’s shown in bed with a lover, then reporting to General Gogol (a Soviet spymaster who recurs in several more films) just as Bond does. This is primarily to establish a sub-conflict—Bond kills her lover in a duel in the Alps, so she vows to kill him once they’ve deep-sixed Jurgens (the speech where Bond tells her that’s life in the spy game is quite good). She also proves herself tough and confident, even if Roger Moore does rescue her at the end.
After the passive and inept women of the last two films, it’s a refreshing change, even given that Bach is still primarily eye candy. While I’m hardly surprised she dropped her vow to kill Bond, it could have been handled better—basically she looks at him at the end of the film and hops into bed, issues resolved.
Still, given a choice, I’ll take competent, kick-ass eye candy any day.

16 responses to “A new kind of Bond girl? The Spy Who Loved Me”