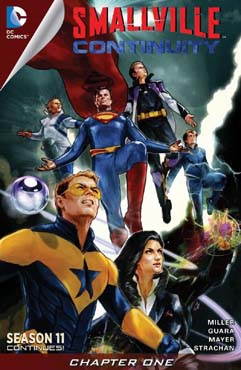 does the cover), wraps up the comic-book continuation of the Smallville TV series. At this point we’ve gone from No Flights, No Tights to a full alt.version of the DCU, which is fine by me but did upset some fans of the show.

The plot of both books concerns the Monitors attempting to bring about the Crisis on Infinite Earths, remodeling the entire multiverse including Superman’s Earth. When he and Lois get sucked into the multiverse, the other heroes struggle to hold on while Lex launches his own scheme for coming out on top. A spectacular, fun story that shows this has become something of a composite mythos, importing not only comic-book elements but characters such as Aya from the Green Lantern animated series. More fun than I found the series.

SUPERMAN/BATMAN: Generations by John Byrne starts with the two heroes as outlaws in 1939, then

follows them every ten years to show how their world changes, sometimes colorful, sometimes grim, sometimes silly (Byrne’s cover at the right is for the goofy story elements of the 1950s). It’s one of Byrne’s better works, though very dark in spots; the ending with Lana, on the other hand, comes too far out of left field.

I picked up THE CARTOGRAPHERS by Peng Shepherd to see if it overlaps with my map-based fantasy Oh the Places You’ll Go! but I think they’re quite different. Protagonist Nell is an expert in old maps who lost her career after “the Junk Box incident.” Then she gets word her estranged father is dead and comes to believe he was murdered over a map — but it’s a cheap gas station map from the 1930s (the kind everyone used to navigate on trips before Google Maps) so what would the point be?

Nell’s struggle and the big secret are cool. Unfortunately Shepherd spends a huge chunk on the book on Nell’s

parents and their friends and what happened when they discovered the secret. They simply weren’t interesting.

I do give Shepherd credit for not making this into a straight conspiracy thriller but the flashbacks ruined the book for me; there are also some serious plot defects I won’t divulge as they come with spoilers.