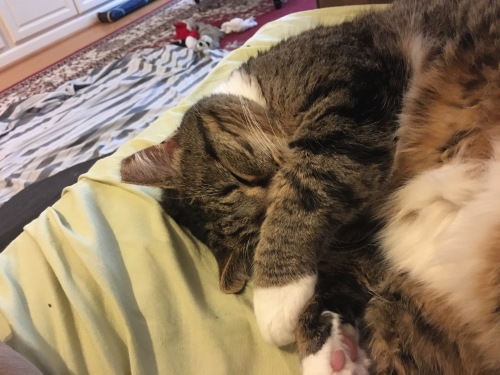 Sure, she looks tamed and kittenish in this photo. But as the weather has turned warm, she’s become much more interested in staying outdoors as much as possible. That’s a little disappointing. Making her an indoor cat or mostly indoor would keep her safer, and the local birds and shrews safer. This winter she stayed inside so much I hoped we were trending that way. Now I’m not so sure.

She’s also really hooked on playing with the laser pointer. When she does come in, she’s likely to sit and stare around, waiting for her friend the little red dot to show up for her to chase. I think she knows it’s something we’re doing, she just doesn’t care. I’m hoping there’s a point at which enough chasing will convince her to sit quietly and chill, but if so I haven’t found it yet. I must admit, I kind of miss her sitting next to me on the couch and just snoozing, but it’s not all about me.

I’m pleased with her diet, though. I went and read up online about cat food and realized I was considerably overstuffing her. Now I’m giving multiple small meals a day, mixing tuna, kibble and cat food; she hasn’t been enthused about the cat food but the mix works for her. Good thing, as we have a lot of cat food (TYG bought it in bulk).

Who knows what’s ahead? Will summer heat encourage her to stay in the way winter cold and February’s drenching rain did? Time will tell.