The agony and the ecstasy!

The agony this week was from Plushie. As I mentioned last Friday, he was having trouble with his back legs so we took him in to the vet. Turns out his left back patella has popped out, which is what happened to Trixie earlier this year. The vet sent him home with painkillers and orders to keep him resting, which had TYG wondering why they weren’t bringing up surgery.

It wasn’t good. Plushie has zero pain tolerance so he was whimpering like crazy, chewing on the injured leg as if that would get out the pain and waking us up in the middle of the night. And leaving blood from his chewed foot in his crate or on our bedsheets. Monday I took him in again for his foot; the vet said he seems to be having some kind of allergic skin reaction (it’s happened before) so she shot him up with antibiotics and anti-itch and sent us home with some other meds.

While he is still a little too keen to chew — we’re keeping him in the cone of shame for now — he’s much better, and sleeping through the night. His leg is improving fast; even given he’s on painkillers, it surprised us after Trixie that he’s able to take a few steps around the yard. It’s almost like the vet knew what they were doing when they said surgery wasn’t their recommendation. So things improved steadily during the weak. And let’s face it, he looks adorable in his fabric cone. Which has the fringe benefit that he’s less likely to jump off the bed with his range of vision limited. 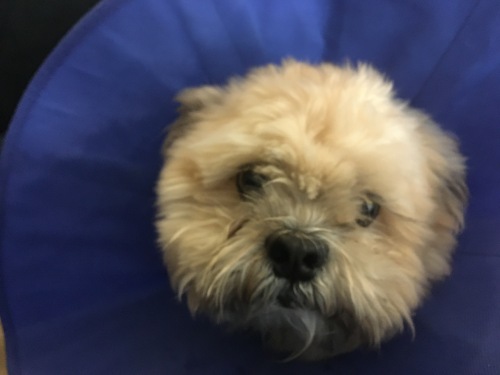 Now the ecstasy: Saturday, despite Plushie’s problems, we agreed to dog-sit for Lily — a Habanese we’ve cared for before — and her younger “brother” Tito the toy poodle. Lily’s a sweet, gentle dog; Tito is a bundle of energy.

Having them over was an absolute blast: Trixie hasn’t played with them in a while and they had much fun being able to romp and chase off-leash. Some photos: 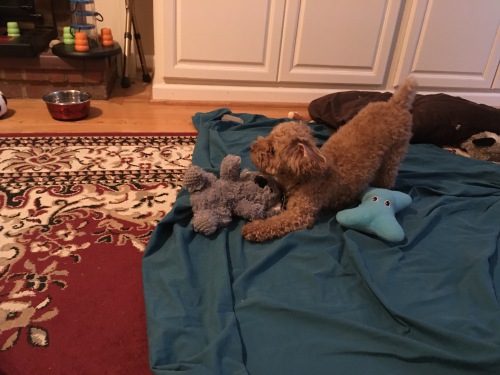 I got crap done Saturday, but I consider that acceptable.

One response to “The agony and the ecstasy!”