Avengers, Batman and Superman: it’s the A-list but is it their A-game?

SUPERMAN: The Golden Age Volume Three by Jerry Siegel, Joe Shuster and several other artists continues in the vein of the first two volumes. We have Lois’ relentless hunt for scoops (reckless, but so much more competent than when I was a kid years later), social issues (can a spoiled heiress realize her duty to her employees?), Luthor and a few other supervillains and an increasing number of fifth columnists and Sinister Foreign Powers, carefully not specified (this was the prewar period when pushing for war against Germany was still a touchy subject). These are entertaining, though not consistent — Superman flies in one story, then goes back to jumping, and some stories still hinge on people never hearing of the Man of Steel. Fun, but definitely not up to Batman in the same era. 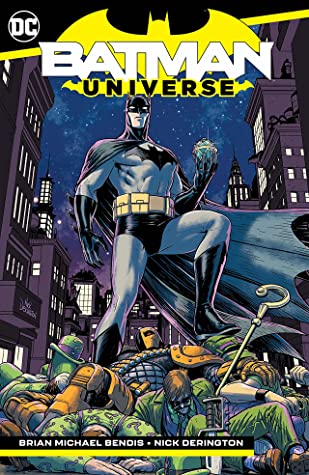 Speaking of the Darknight Detective, BATMAN: Universe is surprisingly fun despite being written by Brian Michael Bendis (art by Nick Derington), whom I’m not fond of. This is a light-hearted romp that starts with the Riddler stealing a mysterious Faberge Egg that’s more than it seems. Tracking the egg sends Batman up against Vandal Savage and bouncing through the DC Universe from Rann to Gorilla City to the Old West, fighting alongside Green Lantern, Nightwing, Adam Strange and Jonah Hex. Lightweight but very enjoyable.

AVENGERS: Masters of Evil by Roy Thomas and various artists (most notably John Buscema) follows up Once An Avenger as the team battle Dragon Man, Diablo, Magneto, Typhon the Terrible, the Super-Adaptoid and the sinister communist super-weapon the Psychotron.There are some really good stories in here (YMMV depending on your taste for the Silver Age) and many things I like, such as Thomas constantly referencing what’s going on with Captain America, Thor and other Avengers or former Avengers in their own books.

On the downside, there’s also a whole lot of writing that indicates Thomas was still learning his craft or just overworked. A new heroic Black Knight (replacing a villain of the same name) shows up but a couple of issues later the Avengers forget that he’s not the same as the villain. The Avengers’ butler Jarvis betrays them for dubious reasons, but they take him back without thinking twice. The Magneto plotline stretches out way longer than it should have. The Black Widow gets a kickass arc helping thwart her former communist masters, then becomes a whiny girlfriend for the rest of this volume (and a good while afterwards).

On the plus side, the book wraps up with an emotional one where Cap uses time travel to determine if Bucky survived the way Cap did, and gets his heart ripped out watching him die again (little did he know …). Then when the Avengers return to the present they enter an alternate timeline where the original team have turned into dictators; can they stop a physically far more powerful Avengers team? There are some clever touches in the scenes where they take down Earth’s other superheroes, such as Thor trying to figure out why Daredevil’s a superhero when he doesn’t apparently have any powers.