Have you heard of this show Star Trek? It’s really good!

A little over a year ago, I started Netflixing Star Trek from the beginning. Having finally finished the first season, I’ve got to say it’s a really good show. Of course I knew that already, but I’m not sure I appreciated it the same way. When the original series was in syndication, I watched it endlessly, over and over, and ever since then it’s been a part of me, much as Sherlock Holmes and comic books are. In a sense I took the show for granted. Now, though, I’m more impressed. And this is probably the first time I’ve caught the episodes in the order they aired and with no syndicated cuts. 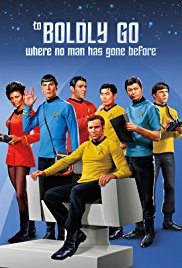 It’s not a perfect show. Crew members in miniskirts. Offhand casual sexism. Having a black woman and an Japanese-American on the bridge was groundbreaking then, but it’s a pretty white cast now (though it pleases me that they do show crewmembers of color rather than making Uhura and Sulu the only nonwhite faces). Kirk, Spock and McCoy are sharply defined, but the other characters much less so. But as I pointed out at the link, we have Charlie X with its toxic-masculine villain and Kirk doesn’t put up with him. He doesn’t tolerate bigotry against Spock in Balance of Terror and I agree with The Mary Sue that he wouldn’t tolerate it against Uhura either.

I can’t imagine what it would have been like as a kid watching the show when it was new. I’d watch almost any show SF show on the air because there were so few of them. Here was one that was a full-on space adventure, with tons of SF concepts (transporters, ray guns, warp speed, alien life) but unlike the space operas of the 1950s, it was played seriously. Many of the episodes use classic SF tropes: This Side of Paradise resembles Invasion of the Body Snatchers while Operation: Annihilate is more like Heinlein’s The Puppet Masters. The Devil in the Dark gives us a misunderstood alien; Arena reworks a Fredric Brown short story; Errand of Mercy, which introduced the Klingons, resembles John W. Campbell’s Twilight (it’s also incredibly funny. Knowing what godlike powers the Organians have, seeing Kirk and Kor treat them as helpless sheeple is hysterical). Harlan Ellison’s Hugo-winning City on the Edge of Forever is first-rate. 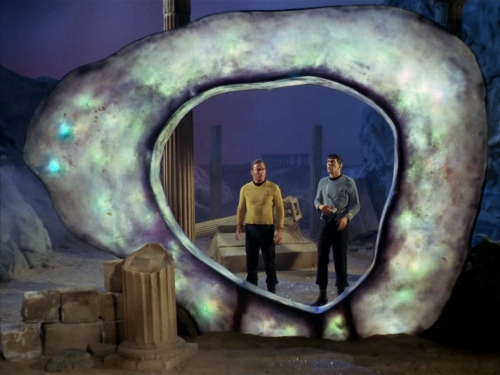 Watching the series in order is interesting because I can see it develop. We have Spock referring to having human ancestors before they settled on a human parent. Uhura flirting with Spock. The introduction of the Romulans (Balance of Terror, which draws on WW II movie tropes) and then the Klingons. The first appearance of Roger Carmel as Harry Mudd; while he only made one more appearance, his roguish conniving has led to countless fanfic and authorized fic appearances (and plans to use him in Next Generation only to have Carmel pass away first).

And while countless people think the show’s essence is “Captain Kirk has sex with hot space chicks” (something I’ll discuss next week), the romantic/sex focus of the show this season is very much on Lost Love. McCoy meets a lost love in the first episode, Man Trap. Nurse Chapel meets hers in What Are Little Girls Made Of? Kirk encounters former lovers in Court-Martial and Shore Leave (a delightful episode written by SF master Theodore Sturgeon). Even Spock turns out to have a former not-quite-lover in This Side of Paradise.

On the downside, I can also see the tropes the show would run into the ground over the following two seasons. The alt.Earth setting (Miri). The computer-controlled culture that has to be liberated (Return of the Archons). The godlike entity that captures the cast (Squire of Gothos — though Errand of Mercy fits that category too).

Still, overall the show only had one truly wretched episode, The Alternative Factor. Didn’t like it as a kid. Hasn’t improved any. That’s a good batting average.

One response to “Have you heard of this show Star Trek? It’s really good!”