The Starman my destination

So I recently finished rereading James Robinson’s classic Starman series and wanted to write about it — but this isn’t that post, it’s more of a prequel. Robinson’s Jack Knight was only one in a long lineage of Starman characters so I wanted to cover Jack’s predecessors first. 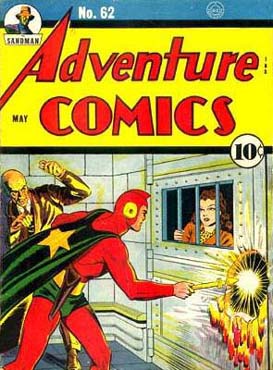 The original Starman, Ted Knight, debuted in Adventure Comics #61 (though I like this Jack Burnley cover from the next issue better). Like many Golden Age characters, he didn’t get an origin: he was Ted Knight, amateur astronomer and bored, timid socialite — except when he changed clothes to become Starman, using his gravity rod to draw power from the stars. In his first adventure he goes up against Dr. Doog and his Brotherhood of the Electron, which is disrupting America’s power grid. It’s a good story by Gardner Fox — the Brotherhood aren’t that far off from someone Doc Savage could have gone up against.

The two volumes Golden Age Starman Archives collect all Ted’s adventures. The first volume is mostly at the level of that first story, including encounters with Starman’s arch-foe, the Mist, and several good one-shot villains (I’m surprised nobody ever reused occult photographer Cuthbert Cain). The second volume gets depressingly mundane; much like the later Doctor Fate stories, it’s mostly Starman using his fists to take down ordinary gangsters. The stories do play well with Ted’s astronomy — several stories pit him against various crooked astrologers, for instance — but mostly they’re mediocre.

Nevertheless Ted came out of retirement in the Silver Age along with the rest of the Justice Society of America. DC editor 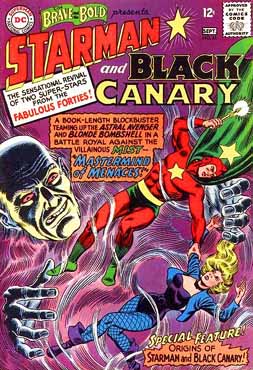 Julie Schwartz tried spinning him off into his own series, teamed with Black Canary, but the two try-out issues flopped, just like they did for a Dr. Fate/Hourman team (but I do like Murphy Anderson’s cover here).

A Bronze Age tryout book, First Issue Special, gave us another Starman, a blue-skinned alien who arrived on Earth to prevent his people’s imminent conquest of our planet. Like all but one of the series, it failed to launch an ongoing book; typically it takes two or three tryout issues to build sales so a series of one shots wasn’t the best approach. In any case, it wasn’t much of a story.

In 1980, we got a better Starman, operating out in space amidst a vast interstellar empire. Prince Gavyn’s adventures lasted for a dozen issues, then got a wrap-up in a Superman team-up in DC Comics Presents.

In the 1980s, Ted Knight got an actual personality in Roy Thomas’s WW II-set retcon series All-Star Squadron. Thomas’s clever idea was that unlike Bruce Wayne, who carefully constructed his wealthy idler pose to hide his identity, Ted Knight really was a bored playboy. He used his stellar technology partly because he wanted the kind of adulation Batman and other heroes received; he wasn’t terribly skilled and easily became intimidated in the face of tough odds.

In the late 1988 we got a good Starman series from Roger Stern and Tom Lyle (who provided the cover below). Will Payton was an ordinary guy until an energy bolt from an orbiting satellite — intended to give superpowers to a selected team, it hit Will instead — filled him with stellar energy. It was a lot of fun until the writing changed hands, at which point I quickly dropped it. After the book was canceled, DC killed Will off in the tedious Total Eclipse crossover event. The series also had Ted Knight’s son David take over his father’s mantle as Starman for one issue.

And then in the 1990s Ted’s other son, Jack assumed the role of Starman in a series that incorporated all these characters into one big legendary legacy which I’ll blog about next week.

One response to “The Starman my destination”