Last weekend, I made bread. Pane tuscan for TYG because she wanted a “rustic Italian bread” to eat with various soups and spreads.

One of our neighbors brews bear and had spent grain left over, so I took some of it and made a spent grain bread. Moist and tasty — and then tragedy struck! 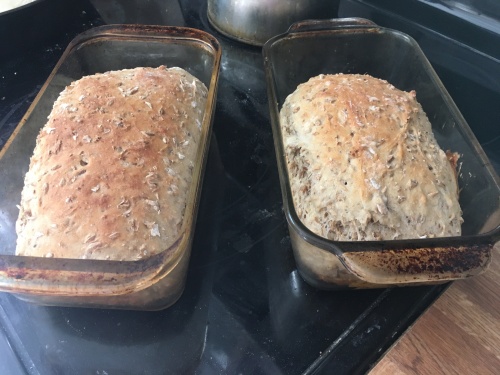 I was a little frazzled after my medical checkup Tuesday (postponed from last month for quarantine reasons) and when I cut myself a slice of spent-grain bread I put it back in the bag without sealing it. When I moved to put it away, it fell and both loaves (okay, what remained of the loaves, I’d been digging into them) fell out and hit the floor. Goodbye bread!

No, the checkup wasn’t that awful. Higher cholesterol and blood pressure than usual, probably do to indulging in too much junk food (we’ll recheck in three months to see). Weight, surprisingly, is good. But I’m a little phobic about blood pressure (it’s the silent killer! What if it’s killing me right now?) and the appointment had been late in the day, which really threw off my schedule (and left me fasting until about 1:30 PM, plus I wanted to make dinner (spaghetti with veggies) and still make my writers’ group meeting (which I did). So throw it all together and I guess I felt distracted and rushed enough to screw up. Sigh.

Still I have some spent grain left, so I’ll make some more this weekend. And not drop it!

One response to “Now THAT’S tragic”