A PI and an Arab boy in this week’s reading

Having read so much Leigh Brackett SF recently, I decided to check out one of her straight mysteries. The only one easily available was NO GOOD FROM A CORPSE, an extremely hardboiled 1944 thriller that has a lot of Raymond Chandler in its DNA but also reminds me of Cornell Woolrich’s Phantom Lady (which came out a couple of years earlier). The violence also reminds me of Mickey Spillane’s Mike Hammer (who debuted a couple of years later) — when protagonist Eddie Clive hits or gets hit, it’s hard, visceral and leaves a mark. And the treatment of women feels more like Spillane than Chandler (whose heroes tended to the chivalric under their hardboiled shells).

Eddie has just returned to LA from an out-of-town case that’s made him quite a high-profile gumshoe. He reunites with Laurel, his almost-girlfriend: Eddie’s crazy about her, but he knows she couldn’t stay faithful to him or any man. Much to Eddie’s annoyance, Laurel also convinces him to help out Mick, Eddie’s closest friend until Mick put the moves on one of Eddie’s previous girlfriends (like Laurel, Mick can’t keep it in his pants); someone’s been sending poison-pen anonymous letters about Mick’s embarrassing past to his wife and Mick wants to know who (I suppose that kind of harassment is pre-internet trolling). They all crash at Laurel’s apartment, but someone clubs Eddie dead and uses Mick’s stick to beat Laurel to death.

Eddie, of course, sets off to find out whodunnit before the LAPD pins it on him. Is it Mick after all? One of his dysfunctional relatives? One of Laurel’s other suitors? How is it that every time Eddie finds a person who can help, they end up dead? It ends up being a solid little thriller, though the sexism gets a little thick (as it does for some of Brackett’s SF). 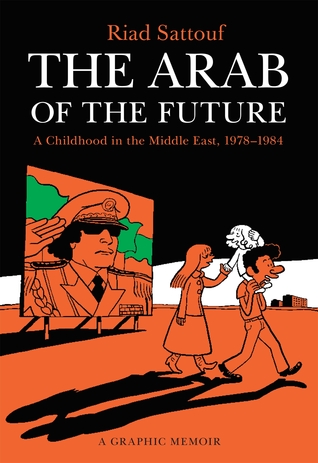 Riad Sattouf was just a kid when his parents — Syrian dad, French mother — upped and moved from France to Libya. THE ARAB OF THE FUTURE: A Childhood in the Middle East, 1978-1984 chronicles Sattouf’s culture shock and experiences dealing with family he’s never met, the policies and economic dysfunction of Khaddafi’s Libya and Assad’s Syria and his parents squabbles and political views. I think I prefer Marjane Satrapi’s Persepolis but if any more volumes of Sattouf’s work are available at the Durham Library — and it’s actually open — I’ll certainly pick ’em up.