Reading Nerds of Color‘s post on how Tarantino’s Once Upon a Time in Hollywood disrespects Bruce Lee got me curious to read about the legendary kung fu star. Fortunately the library had BRUCE LEE: A Life by Matthew Polly, chronicling, Bruce’s story from hyperkinetic mixed-race child actor (his nickname as a kid was “Never sits still”) to teenage brawler and street punk to cha-cha fanatic to gung fu master, and all of that before he began his climb to become Hollywood’s first Chinese superstar. Martial arts movies and Asian-American actors are so much more common now (though obviously Hollywood’s still solidly white-dominated) that it was a shock to realize how out there Lee’s ambitions seemed at the time, and how much discrimination he had to deal with (one newspaper article on Lee actually worked “Rotsa Ruck” into the headline). Nor did he have it easy in Hong Kong, where initial enthusiasm for the hometown boy’s success was later shaded by concerns Lee’s biracial heritage meant he wasn’t Chinese enough. Very good. 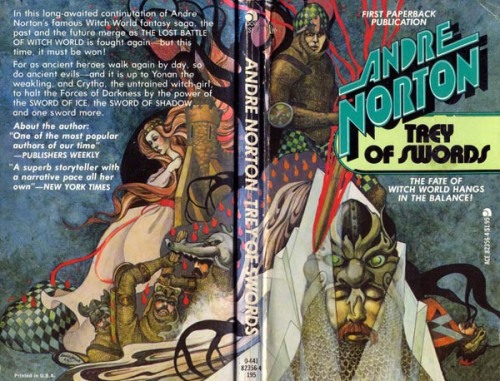 TREY OF SWORDS by Andre Norton (striking cover by Charles Mikolaycak) is set in Escore roughly during the events of Warlock of the Witch World. The characters are a stock type in this series: Yonan and Crytha, both mixed-race, both orphans, both uncertain where they fit in and Yonan crushing on an oblivious Crytha. The first two sections of the book involve Yonan discovering the magical Sword of Ice (or vice versa — the Sword chooses it’s wielders) and alongside an ancient warrior traveling back in time to avert one of the Dark’s great triumphs in Escore’s past. The effects of this in the present aren’t really dwelt with, except Crytha, who has just enough untapped power to be vulnerable to the Dark’s control, encounters some of the leftover villains of that battle and has to choose her own destiny. I can’t say this really grabbed me but that’s partly because I read it while I was surfeited with dog care and unable to focus. It does have an unusual end for a Witch World book in that Crytha doesn’t come to return Yonan’s feelings, and chooses a life alone to study her craft.

GIRL GENIUS: The Second Journey of Agatha Heterodyne: The Incorruptible Library by Phil and Kaja Foglio continues Agatha’s adventures as the threat of the mind-controlling Other looms over Europe and Agatha and her crew penetrate the catacombs under Paris in search of a McGuffin that … well, actually I’m not quite sure. There are so many characters, plot threads and character bits that I found it impossible to keep everything straight. It was still amusing (“I write love poetry about cheese.”) and I still look forward to the next volume, but it wasn’t very coherent.

YOUR CAT: The Owner’s Manual: Hundreds of Secrets, Surprises and Solutions for Raising a Happy, Healthy Cat by Dr. Marty Becker didn’t actually have any surprises as it covers the same material as the other cat books I’ve read recently. Which isn’t a criticism of the book — if it had been the first one I picked up, I’d have liked it fine — but I wound up skimming most of it. The chapter on cat training may come in useful though.