Two great companions and the Master’s return: Doctor Who, Season 14

Wow, S14 of the original series was amazing. First rate stories, Sarah Jane’s last episodes, the return of the Master and the intro of Leela, the companion who kills people.

In a media world where formidable women protagonists are a lot more common, I’m not sure anyone can appreciate how totally novel Leela looked when she debuted. A barbarian warrior, she fights well, doesn’t lose her cool (faced with unkillable adversaries in Robots of Death and Talons of Weng-Chiang, she retreats but it’s strategic, not terrified) and has no qualms about killing people. Within the world of Doctor Who she stands out even now: there’s never been a companion as tough and deadly as she was.

The season kicked off with its weakest storyline, THE MASQUE OF MANDRAGORA. Sarah and the Doctor arrive in Renaissance Italy, dragging along a piece of the star-entity called the Mandragora Helix. They’re all embroiled in a local power struggle between Giulano, an enlightened young noble, and his power hungry uncle, Federico (“Only corpses fail to stand in my presence.”), allied with the scheming astrologer Hieronymous and a local cult. The Mandragora, which dislikes human free will and reason, sides with the bad guys; the Doctor and Sarah are on the other side.  I remember liking this one when I first saw it, but rewatching it’s too much mundane swashbuckler intrigues, not enough of the Helix. This does give the reveal that the reason Sarah can speak Italian (or anything else) is a “Time Lord gift” the Doctor shares with her. “It depends on whether the moon is made of cheese and whether thirteen roosters cluck at midnight.”

Sarah Jane bows out with THE HAND OF FEAR, which begins when a literal hand is turned up in a quarry, buried in rock (there are some jokes about the series’  long history of using quarries as barren alien planets). It possesses Sarah Jane (Elisabeth Sladen does an excellent turn) and takes drastic steps to regenerate (“Eldrad must live again!”). With the Doctor and Sarah in tow, Eldrad (much less memorable than Eldrad-possessed Sarah Jane)heads back to its homeworld, but it’s fudged some of the backstory — and there are surprises waiting even beyond that. It’s a good story, ending with Sarah Jane deciding enough’s enough (amusingly, she walks off humming the song My Daddy Wouldn’t Buy Me a Bow-Wow, little realizing the Doctor would some day gift her with a robot dog). “The Atomic Energy Commission is not going to believe this.” 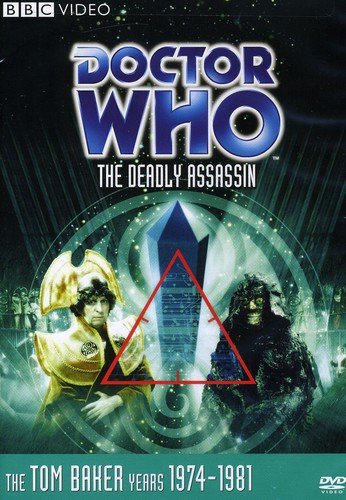 At the end of that serial, the Doctor gets a summons to Gallifrey. They’re in the middle of a presidential election, but somewhere among the crowds lurks THE DEADLY ASSASSIN … and it appears to be the Doctor. Can he clear his name before he’s executed? This marks the return of the Master after several years absence, though here he’s a physical wreck from running out of regenerations (it would be another four seasons before he returned and got a new face). This one is intense, twisty and effective, though at the time it upset a lot of fans: showing the Time Lords riven by internal politics and coming off almost like humans didn’t fit most people’s ideas of what Gallifrey was like. With time, more people have recognized how good this one is. “You’d delay an execution to pull the wings off a fly.”

THE FACE OF EVIL has a familiar set-up — Earth-settled planet that’s forgotten its origins, devolving into two hostile cultures, one technological, one savage. It’s well-executed though, and it turns out the Doctor has a surprising role in the planet’s history. The best thing about this one, though, is the debut of Leela. “You know the very powerful and the very stupid have one thing in common. They don’t alter their views to fit the facts.”

THE ROBOTS OF DEATH would be a standout in any other season but it’s almost minor in S14. The TARDIS deposits the Doctor and Leela inside a giant mechanical miner whose crew are scouring a desert world for potentially valuable minerals. Unfortunately, some of the robot workers have decided to ignore the First Law of Robots and begin killing people. Oh, and look, these two strangers showing up must obviously be the guilty parties! The result is a mix of old-school murder mystery and SF. “I see, you’re one of those boring maniacs who likes to gloat.”

Last, but definitely not least we have the singularly frustrating THE TALONS OF WENG-CHIANG. The frustrating part is that it leans very heavily on Sinister Oriental stereotypes including tongs, opium, Fu Manchu-type villains and the general Othering of the Chinese. Not to mention that the sinister Chinese stage magician Chang is a British guy in yellowface. I’m sure for some fans these details will ruin what’s otherwise a fantastic story.

The Doctor takes Leela to Victorian London to see how her Earth ancestors lived. They land, wouldn’t you know, just as Chang is mysteriously kidnapping local women using his hypnotic powers, with his not-so-inanimate ventriloquist dummy and the Scorpion Tong eliminating anyone who gets in the way. The Doctor and Leela find themselves working alongside the flamboyant showman Jago (Christopher Benjamin) and Professor Litefoot (Trevor Baxter) to learn what’s behind it all (it turns out to involve a rival time traveler whose scientific theories have some flaws). Despite running six parts, it never feels padded: it’s well-acted, tense, well-performed and cleverly done. Scriptwriter Robert Holmes actually hoped to give Jago and Litefoot a spinoff series, but it never came to pass.  “Unfortunately the night vapors are very bad for my chest.”

3 responses to “Two great companions and the Master’s return: Doctor Who, Season 14”