So after reading Teen Titans: The Silver Age a while back —

—I continued on, into the Bronze Age, then into what’s generally considered the definitive version of the team, the Marv Wolfman/George Perez launch in the 1980s. Having given away some of the last of that series (it didn’t end on a high note) I wound up finishing with the Titans Hunt arc, which Wolfman considers his last first-rate work on the book (all my references to creators’ opinions are from the interviews collected here). And it got me thinking, as reading stuff often does.

The story-line was a massive attempt to tell an epic that would shake up the Titans’ status quo. The Wildebeest, a supervillain they’ve battled before, captures almost the entire team. A handful of their allies — Changeling’s father, the Terminator, Raven’s mother, the Russian hero Red Star — join forces with Nightwing and Troia. New heroes, such as Phantasm, appear out of nowhere.

Ultimately it turns out the Wildebeests are not what they seem. Originally they were a team of criminals using the same battle-suit, figuring their motives and tactics would be so different, the Titans could never predict the Wildebeest’s next move. Then the Titan Jericho took them over: he’d been corrupted by hundreds of dark souls during a previous battle and sought to give them the Titans’ bodies to possess until he could grow new bodies for them. The Wildebeests provided the force to capture the team and to grow the new bodies.

My first thought was that it’s a good example of how we writers have certain tropes or tricks we’re drawn too. Either they appeal to our psyche or we just think they work for some reason. While I doubt I noticed it on first reading, when I went months between issues, the Titans Hunt reuses a shtick Wolfman has deployed before, having a villain who’s not just one step but a hundred steps ahead of the heroes.

In the classic Judas Contract story, it turns out the Titans’ member Terra has been working from within to destroy them. She’s given Deathstroke all their secrets, which he uses to anticipate their every move and trap the entire team. Here, the Wildebeests’ plot hinges on Jericho knowing the team from the inside out, figuring exactly the traps to destroy them. But that was nothing compared to Brother Blood, the evil cult leader who tied with Deathstroke and Trigon as the Titans’ arch-foe during the 1980s (and showed up much more). With Brother Blood, whatever the team does is always a mistake. He’s anticipated their every move and laid plans to exploit it. Even when they win, it’s actually a minor sacrifice by Blood to advance his ultimate goal. 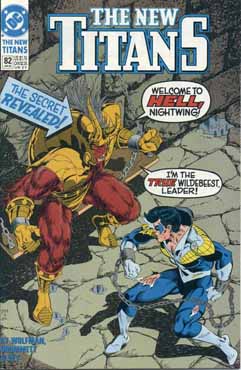 The Wildebeests were much like that. Always anticipating, always a step ahead, even before Jericho took them over. While it’s an effective tactic for creating a smart, formidable villain, I think Wolfman overplays it: the Wildebeests, like Blood, are so successful the heroes look not outwitted but kind of incompetent.

The second thing I learned is that the creative process in a medium such as comics (or TV. Or movies) is rarely clean-cut. As a writer I usually imagine the comics writer and to some extent the artist shaping the story, even though I know perfectly well there are other hands to stir the pot.

Titans Hunt was an excellent example. The initiator wasn’t Wolfman but the book’s new editor, Jonathan Peterson. Sales had become sluggish but Peterson believed that with some radical changes and a drastic plotline that included deaths, he could shake up the book and the sales figures. His goal was to beat X-Men at their own game and to make the book more kickass and violent, with a lot less of the warm emotional scenes Wolfman was good at (Wolfman says he was on board with this) I don’t think it’s coincidence that Peterson wanted to kill off Troia’s husband and Jericho, two warm, empathic, non-kickass men.

Further complicating things were various crossovers that slowed down the arc and later editorial interference. A plotline with Cyborg becoming brain-dead was supposed to last a few months; instead it ran for years.

Okay, none of my thoughts were deep, but hopefully you found ’em interesting.

#SFWApro. All rights to images (covers by Tom Grummett) remain with current holders.

One response to “Learn by Rereading: Titans Hunt”