It’s the Wild Kingdom around here this week

Once again, TYG is growing some basil in planters on our deck. The herbs in one planter are doing absolutely awful, which puzzled us. However I think I’ve found the answer—they’re being crushed under several pounds of cat!

Wisp is definitely comfortable out on the deck. She’s also trying to get closer to Trixie. A couple of times she’s come in and nuzzled Trixie before being distracted by food. Trixie’s reaction the second time was to spin wildly around.

Unfortunately we’ve had to postpone further experiments along this line. Wisp has a wound on her side, probably from one of her catfights, and we don’t want to risk exposing the dogs to whatever germs might be in it. We’ve been trying to gauge whether it’s getting worse or better the past week, but she doesn’t stay still long enough for us to really tell. It might be scabbing over; it might be getting worse. Though she’s still as lively as ever when she moves, so it can’t be too bad.

Monday we tried setting out the cat trap again, figuring that if she went into it we’d take her to our vet and let her check out the wound (TYG’s idea. I think it’s very sweet of her). Unfortunately she seems to remember this didn’t go well last time: even with a small bowl of tuna beyond the pressure plate that closes the trap, she wouldn’t go in. After a day without her eating, we compromised: Tuesday morning I set her food out inside the trap, but close to the entrance. Hopefully we can get her used to going inside until … gotcha (too bad she’s not as dumb as Plushie. He never thinks twice where food is involved).

This will probably not be fast enough to treat her wounds, but it’s coming up on time for her to get booster shots (we got her initial round last year when we had her fixed), so we’ll need to do it eventually.

Fortunately none of our new behaviors are freaking her out enough to stay away. She is, after all, our cat now, sort of.

Not so fortunately, when I opened the blinds this morning to see if she was waiting for breakfast, I found the trap had been sprung. But not by her.

This guy (female?) wandered in to lick out the plates, I guess. And wandered all the way back and triggered the pressure plate. I lifted up the gate (with a stick, I wasn’t sure I should get close), but he just stayed still until we were gone, and then for a while afterwards. He was remarkably chill about the whole thing.

Oh, and to round out the week, Wednesday morning TYG and a woman dropping her kid off at the bus stop spotted a hornet’s nest in our magnolia tree. 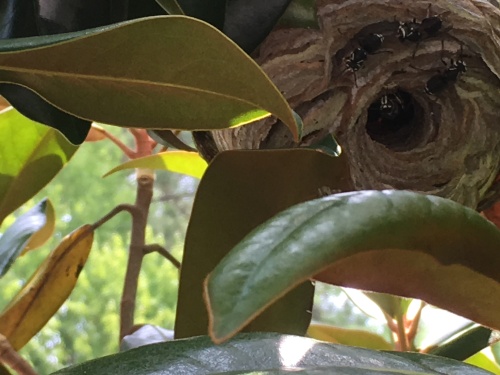 Hornets being aggressive, and Plushie liking to poop under the tree — not to mention it’s right near a bus stop — we decided to call Orkin, who took care of it. If it had been in a better place, we might have tried coexistence.

Quite a lively week.

#SFWApro. Photograph is mine.

Filed under The Dog Ate My Homework