Destiny turns on a dime — or a batarang

Recently finishing BATMAN: The Golden Age Omnibus Vol. 4 reminded me one of the things I love about the Golden Age Batman is the stories the series tells focusing on ordinary people.

Of course lots of comics, then and now, include ordinary people in the cast, as friends of the hero or as victims of the bad guy. What makes this era distinctive is that the innocents caught up in the story almost seem to have their own character arcs going on, into which Batman and Robin stumble.

The previous omnibus, for example, gave us Destiny’s Auction. A crook, an aspiring actress and an over the hill thespian all lose possession of their steamer trunks. A year later they buy them back at a seized property auction, but ooops, they get the wrong ones. Now they’re all entangled, and the crook is very willing to use force to recover his trunk. At the end of the story though, the two actors have both jump-started their careers. Even though Batman intervened to save them, it feels like their personal stories are their own, not just supporting Bat-characters.

Similarly, in Detective Comics #93, we have One Night of Crime. Crooks fleeing the Batman take a tour bus hostage. Various passengers get to work out their own crises in addition to the main plot.

Batman #33 has The Search for Santa Claus, in which three despairing men, take up roles as Santa for the Christmas season. By the end of the story, which involves crooked heirs trying to kill one of the Santa, they’ve all got a new lease on life.

Detective #94 gave us No One Must Know, in which the Dynamic Duo help out an escaped con whose happiness and whose son’s marriage could be ruined by a blackmail scheme.

Detective #112’s A Case Without a Crime has the employees of a small, tightly knit shop thrown into doubt when they discover one of them has sto-

len $99 from the register. Can Batman restore their faith in each other, particularly when it becomes obvious none of them committed the crime? And why steal such an odd figure, anyway?

I still saw stories along these lines in the Silver Age but not as well done. And now they’ve faded away, for the most part.

The omnibus has lots of other good stuff. We have more stories of the Joker and the Penguin (Catwoman only gets one minor story), more war stories before moving into the post-war period, a few new villains such as the Blaze and plenty of ordinary criminals. Alfred gets his own series, four pagers in which he tries to be a detective and succeeds in spite of himself. And just as the previous volume focused on different specialty cops, this one gives us a look at the mail service and Gotham City’s graveyard shift.

And there’s a particular favorite of mine, from World’s Finest Comics #105, The Batman Goes Broke. After one of Bruce’s companies goes belly up from embezzlement, Bruce wipes out his fortune to reimburse the investors. Trouble is, without money the Dynamic Duo can’t pay for all the equipment they need. And working a day job to put a roof over their head will leave Bruce without the time to fight crime and train. It’s all over (spoiler: it all works out). It’s a good story and it amuses me that a couple of decades later, people considered Stan Lee a revolutionary for dealing with superhero money issues (Stan definitely did break a lot of fresh ground, no argument, but it still amuses me). 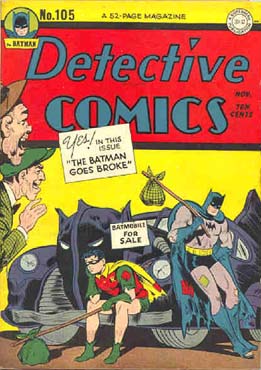