THE LIFE AND DEATH OF CAPTAIN MARVEL by Jim Starlin and others collects the original Bronze Age Thanos saga, which elevated Mar-Vell from a C-lister to a major character as he battles Thanos’ elaborate schemes, attains cosmic awareness and saves the universe. It’s the first storyline to realize the full potential of the Cosmic Cube (as opposed to its role in Captain America a few years earlier) and the story is excellent, though I still prefer Starlin’s Warlock run.

After his father’s death from cancer, Starlin returned to Captain Marvel for The Death of Captain Marvel, a graphic novel in which Mar-Vell discovers a past adventure (included in the book) exposed him to a deadly nerve gas that has slowly been killing him with cancer. His many friends put their heart and soul into finding a cure, but in the end they and “Marv” have to accept that fact that sometimes people just die, unheroically and hopelessly. It’s intensely moving, the last work from Starlin that I liked.

I have a fondness for oddball superhero stories when they work, and THE TALENTED RIBKINS by Ladee Hubbard works. Jonny Ribkins comes from a family of metahumans (one of several — they’re not unique) and possesses the ability to map out places he’s never seen. In his youth, he and his friends used their powers to protect civil rights activists; later Johnny and his brother (possessing Spidey’s wall-climbing powers) used their abilities to steal. Now Johnny’s old, desperate to pay off a debt to a powerful businessman and stuck taking his teenage niece along on his road trip. The results are quirky and low-key, but I liked them, though the ending dissolved into film cliches (don’t try to fit in when you’re born to stand out!).

GIRL GENIUS: City of Lightning by Phil and Kaja Foglio continues Agatha Heterodyne’s quest to free her city from its temporal prison. First she has to deal with an intelligent, belligerent and powerful locomotive, then she and her crew arrive in Paris, a city riven by scheming and ambitious sparks but already taken with the legend of the new Heterodyne (she’s being marketed for everything from hats to bath oil). Funny as always, though the sheer scope of the cast frequently makes it harder for me to follow what’s going on.

COMIC BOOK IMPLOSION: An Oral History of DC Comics Circa 1978 by Keith Dallas and John Wells actually starts with the mid-1970s as DC struggled to regain its dominance over Marvel Comics and outsider Jenette Kahn came on board as publisher to shake things up. Her most ambitious project was the “DC Explosion” — rather than simply hike the current 35 cent price to 40 cents, raise it to 50 cents with an expanded page count. Retailers would make more profit, making the books more attractive, and readers would get something for shelling out extra.

Oops. No sooner did the project launch than Warner, the corporate owner since the late 1960s, slapped it down: comics went back to normal size and DC had to cut its line by 40 percent, the DC Implosion (though Marvel cut massive numbers of books that year too, it didn’t get the publicity). This isn’t really an oral history (which implies someone sat down and talked to the players in the present) as much as culling old interviews and articles for contemporary accounts and perspectives at both DC and Marvel, mixed with a few more recent interviews (this is not a bad thing — contemporary material isn’t automatically more accurate but it isn’t blurred by time).  It follows the fallout from the Implosion (a lot of suddenly fired people went to work for Marvel)  through the launch of the Marv Wolfman/George Perez Teen Titans, which proved to the world that DC wasn’t permanently stuck in second place. 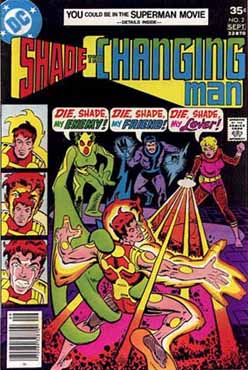 As someone seriously pumped about the Explosion and disappointed when it collapsed (particularly as it took down books I liked such as Shade the Changing Man), the high point of Comic Book Implosion is the detailed account of what happened to all that extra material: was it completed? Was it ever published (unsurprisingly a lot of stuff has shown up in more recent hardback and TPB collection)? Almost everything was published in 30 or 40 copies of Canceled Comics Cavalcade, if nowhere else (these were printed to protect copyright in the material and handed out to some of the creators). While I was fascinated to know these existed, I suspect if I saw them I’d agree with writer Mark Waid, who got to flip through one while working at DC and discovered it wasn’t full of lost classics. 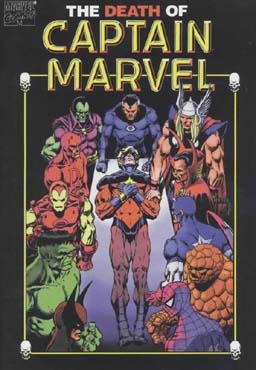 2 responses to “Super powers and comics: this week’s reading”