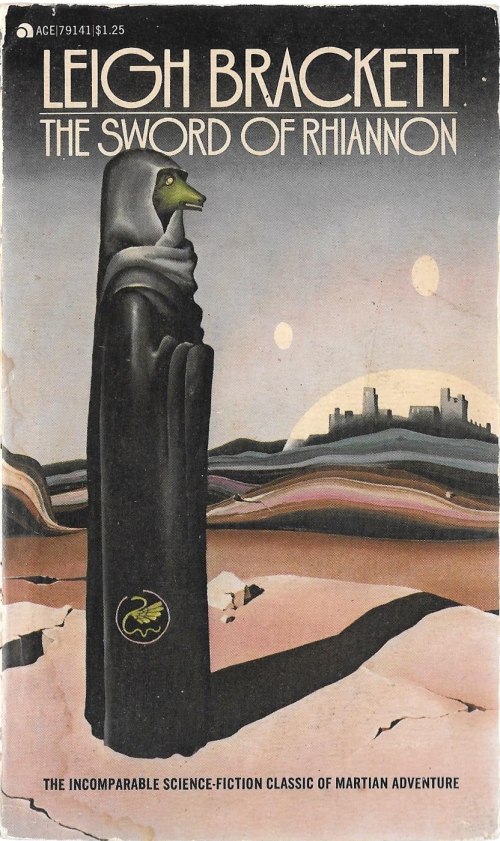 While it’s not an actual goal, I do plan on rereading a lot of old favorites this year, including SF author Leigh Brackett. THE SWORD OF RHIANNON is set on Brackett’s version of Mars, an Edgar Rice Burroughs-influenced dying world where treacherous, corrupt cities sit on the edges of dried-up seas. Carse is an Earther who’s made a name for himself as a criminal on Mars; when he tries to loot the tomb of Rhiannon, the ancient Martian lord of evil, Carse somehow winds up back in the past, when Mars was still a fertile world. He finds himself enslaved, then leading the fight against the tyrants of Sark, but it turns out Rhiannon isn’t done with him …

This combines elements of Burroughs with A. Merritt’s Dwellers in the Mirage, resulting in a book that’s familiar (it’s far from Brackett’s most original work) but pleasantly entertaining (if you’re into old-style pulp adventure, which I am). However her use of Celtic names such as Rhiannon (and other knock-off names such as “Barrakesh”) is very jarring, though maybe the original audience wouldn’t have picked up on that. It’s also very reminiscent of themes in her later Skaith novels (dying world, genetically engineered races adapted to different environments) though that’s not a flaw, just something I didn’t pick up on during my first reading.

GHOSTS KNOW by the great horror writer Ramsey Campbell was a real disappointment. Given the title, I understandably assumed this would be a ghost story; instead it’s a tale about a talk-radio host who tries to boost ratings by challenging a fake psychic. This leads to the host getting framed as the kidnapper in a case the psychic is investigating, so the end result is a Hitchcock-style story of an innocent man struggling to clear his name. Unfortunately the protagonist is too much of a sulky jerk for his plight to engage me and the lack of a supernatural element was a disappointment.

The fourth and final volume of Ed Brubaker and Sean Phillips’ KILL OR BE KILLED (I’ve previously read Vol. 1 and 2) has vigilante protagonist Dylan stuck in a mental hospital after assaulting one of his friends. When he tries to tell the doctor what he’s been doing, they point out the vigilante killings are still going on; he insists it’s a copycat, they insist he’s delusional. Meanwhile, the Russian Mafia is still tracking him down for his attacks on them. Focusing so much on Dylan’s internal struggles was a mistake because as I complained before, he’s the weakest part of the series, a stereotypical millennial whining about living a shitty life in a shitty world he never made. A bigger problem is that the ending twist, while not Kingdom of the Wicked awful, is pretty bad. I’m glad I used the library instead of putting money down on this.

MARVEL MASTERWORKS: Sub-Mariner is a Silver Age collection primarily by Stan Lee and Gene Colan (the Adam Austin of some issues is Colan under a pseudonym). This opens with a Daredevil story in which Namor goes to court, only to back out when treacherous warlord Krang tries taking over Atlantis to wage war on the surface world; to prove his right to the throne Namor, in his own series, must seek out the trident of Neptune in an adventure that resembles the Aquaman movie’s plot.

Colan’s art is awesome but the writing is second-rate Lee. Krang is an uninspired villain who does everything but twirl his mustache and Dorma, Namor’s love, is just a train wreck, never displaying any agency except when it makes things worse for Namor. And because Subby is alone so much, we get way too much of his bombastic, high-flown speech pattern without any normal people to balance it out. Lee and Colan still infuse this with enough drama to make it entertaining, but it’s not A-list. 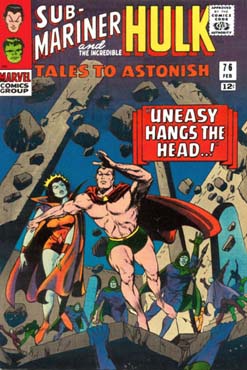 #SFWApro. All rights to images (I don’t know the first artist; second cover is Colan’s) remain with current holder.