The Strangeness of Strange Sports Stories 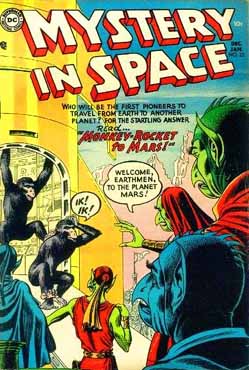 Veteran DC editor Julius Schwartz shepherded the Silver Age into being with a stable of heroes including Flash, Green Lantern, Hawkman and Atom. In the 1950s interregnum between the Gold and Silver, Schwartz offered readers two anthology series, Mystery in Space and Strange Adventures. An early SF fan and SF editor, Schwartz had the eye for a story concept that made them both successful. In 1962 he tried another anthology with less success: Strange Sports Stories, which had five try-out issues in Brave and the Bold without making it to series. 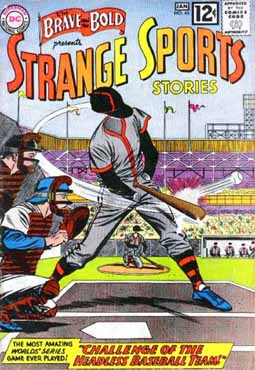 Paranormal sports stories make a small but noteworthy subgenre of sports movies, including Angels in the Outfield (god helps a grumpy manager lead his team to victory), Damn Yankees (former baseball player gets his youth back to help his favorite team beat the Yankees), It Happens Every Spring (scientist becames star pitcher through use of a wood-repelling chemical) and Rookie of the Year (freak accident gives kid a super-fastball). The films all accept that using science or magic to win games is morally A-OK, provided the hero wins the last game or the last pitch without their powers, thereby proving that they have the right stuff.

The movies are sports stories with a paranormal element; Schwartz’s five issues (written by veteran writers John Broome and Gardner Fox) were SF stories with a sports element. In “The Hot Shot Hoopsters,” a tight-fisted millionaire agrees to underwrite his alma mater’s new science center if the teen geniuses doing research there prove their bionic research works by becoming basketball champions. With their physical abilities enhanced, they successfully make it to the state championship. Their opponents think they’ve figured out how to neutralize them, but the team has one trick left in store … Rather than win without their powers, the kids prove themselves by being smart in how they use them.

The second story, “Danger on the Martian Links,” is built around the premise that in future golf you always play the ball where it lies, even if it’s in a pool of acid or the edge of a live volcano. A champion golfer not only has to play golf, they have to have a skill set that would put winners on Survivor to shame. When one golfer discovers he’s right in the path of an alien invasion, he plays on, and takes out the aliens in the process.

“Saga of the Secret Sportsmen” looked at a future Earth where sports have been banned in favor of videogames (less risk of injury! It’s for the players own good). A team of athletes trains illegally, in secret — and when a sneak alien attack conquers Earth, their skills are the planet’s last hope.

One distinctive feature of the art (Carmine Infantino primarily) was that in between the panels the story showed silhouettes of the players in action, giving an impression of greater motion than a normal story would.

While the series didn’t make it in the Silver Age, the Bronze was another story. When DC reprinted the original stories in a couple of specials, the sales were so good, Strange Sports Stories became its own book (did the old-school style seem more novel a decade later?). This time it mixed fantasy in with the super-science. In #3, for example, a time-traveling Merlin discovers the Knights high-school football team (composed mostly of nerds dragooned into playing) is hopelessly outmatched against its steroid-case opponents. He gives them invisible armor to even the odds.

In the second story, we visit a future Olympics where pole vaulters actually leap through time; one candidate accidentally leaps all the way back to the 20th century and has to find a way home. Written by Elliot S. Maggin, it’s very true to the spirit of the earlier adventures.

After six issues, this one folded. The title, however, resurrected in 2015 as a Vertigo book, which from what I’ve seen I didn’t care for (as it only lasted four issues, I guess nobody else did).

While the concept doesn’t seem it ever had the strength to sustain a series, the Silver and Bronze Age stories remain a lot of fun.