Is There a Doctor In the House? Lots!

The past week reminded me of when I’d be watching nothing but time travel material for Now and Then We Time Travel. I started subscribing to BritBox, a streaming service for British shows. The main reason was the access to Doctor Who, which is surprisingly spotty on Netflix. I’d Netflixed the first two Tom Baker serials a while back, but I started on Britbox by going back further …

THE POWER OF THE DALEKS was the first Second Doctor serial; Patrick Troughton here is so dotty and so unlike William Hartnell’s cantankerous senior that companions Ben and Polly and even the Doctor himself aren’t sure he’s really who he says he is. To make matters worse the TARDIS has dropped them on a colony planet riven by rival factions, one of which is convinced these mechanical creatures they found in a spaceship will make wonderful robot servants … Although the video was lost the soundtrack wasn’t, so the Beeb animated it as they did with Hartnell’s The Reign of Terror. Not a classic story, but a landmark for proving the show could survive the loss of its star. The emphasis that the Doctor survived through the power of the TARDIS shows they still hadn’t established regeneration as normal — even when Troughton left at the end of War Games, it was the Time Lords forcing him to change (it wouldn’t be until the Fourth Doctor that regeneration became a normal Time Lord thing). “The law of the Daleks is in effect.”

Enough of THE WHEEL IN SPACE survives that rather than use animation, the BBC used stills from the show to accompany the voice track (two episodes remain intact). The Second Doctor and Jamie land on a drifting rocket from which they wind up on the eponymous space station. Here they meet Zoey, a brilliant, petite young woman who begins to realize her life has trained her to prepare for emergencies but only carefully predicted ones. Which does not include an attack on the Wheel by the Cybermen … Zoe’s one of my favorite companions (cute, small, brainy brunette — it’s like I have a type!) and the serial is overall good, but loses steam at the finish (the purpose of all the Cyber-scheming to seize the Wheel is quite underwhelming). And it’s depressing to think of the Time Lords just wiping Zoe’s memory at the end of War Games and dropping her back on the Wheel; I do hope she found some other way to break out of the box her society put her in. “Logic, my dear Zoe, only allows one to be wrong with authority.”

Last year’s Christmas special TWICE UPON A TIME (on Amazon Prime, not BritBox) has Capaldi contemplating not regenerating when he winds up meeting the First Doctor (David Bradley) who’s contemplating doing the same thing, which would, of course unmake the entire series. Can they survive and work together long enough to stop the seemingly sinister schemes of …. Testimony? A fun concept, though a bit heavy-handed on First Doctor Sexism; the ending gives us the new female Doctor, though not for very long. “By any analysis evil should always win. Good is not a practical survival strategy.” 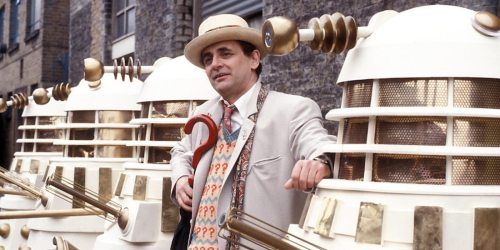 THE FIVE (ISH) DOCTORS REBOOT was a spoof special tied to the 50th anniversary of the show in which Peter Davison, Colin Baker and Sylvester McCoy (Doctors Five Through Seven) desperately try to convince current showrunner Stephen Moffat that they’re a vital part of the history and need to make an appearance — oh, did you know McCoy was in The Hobbit, a major blockbuster theatrical release? Fluffy but very funny. “Instead of a sonic screwdriver I could have sonic beams come out my eyes!”

#SFWApro. All rights to the images remain with current holder

3 responses to “Is There a Doctor In the House? Lots!”