As I do every year, I drove down last weekend to Greenville SC to play Culture Quest on my friend Courtney’s team. It’s fun and a chance to hang out with one of my pre-Durham friends.

CultureQuest is a Mensan trivia game, though more skewed to knowledge — history, science, literature, plus pop culture and (sigh) sports (I suck at sports questions). Each five-person team gets 90 minutes to cover as much as possible, no Googling or use of any reference sources (it’s honor-system). It’s tough. Frequently humiliatingly tough. There were some questions I should have gotten (the source novel for Who Framed Roger Rabbit? is Who Censored Roger Rabbit, not “who shot”), some I had no chance with, some that were lucky guesses. And the same for the rest of the team. Courtney has a good eye for getting a mix of expertise and knowledge, which is a big help. Art and Robert, for instance, get questions I’d have no chance with.

I’m particularly pleased with two answers because nobody else on the local Mensa teams (there’s a group party afterwards where we all hang out together) had a clue. I doubt I’ll be the only one to get them right, but I can hope (one year I was one of two people to answer one question. That’s cool). One was the logo for Alfa Romeo; I was able to answer that one simply because it’s modeled on the city symbols of Milan (including a snake devouring a man) and I’m familiar with that from something I wrote years ago. The other was to name the two characters besides Charley Brown in the first ever Peanuts strip. Having read The Complete Peanuts Vol. 1 (and on from there), I knew one of the kids was Shermy and the other was either Violet or Patty. I guessed Patty, and I was right (Violet actually didn’t appear until later). Go me!

Beyond that Courtney and I (plus her son Baer, and their dog Watson) spent time just hanging out, or going shopping. I picked up some tea, and we had Indian buffet for lunch plus I did a lot of watching Baer while Courtney checked out shoes (much discussion of Lego followed. He’s a fan). I also wound up casing a convenient used book/DVD store when I first arrived (they were out) and of course succumbed. But not as badly as I might have!

Happily the drive both up and back (on Monday) went smoothly. On the way back there was a massive stoppage (from the cop cars, I’m guessing an accident) but it was for cars heading south, not north.

It was a good weekend. As I didn’t take many photos, here’s one of the Gaffney giant peach from our trip to Greenville in March. 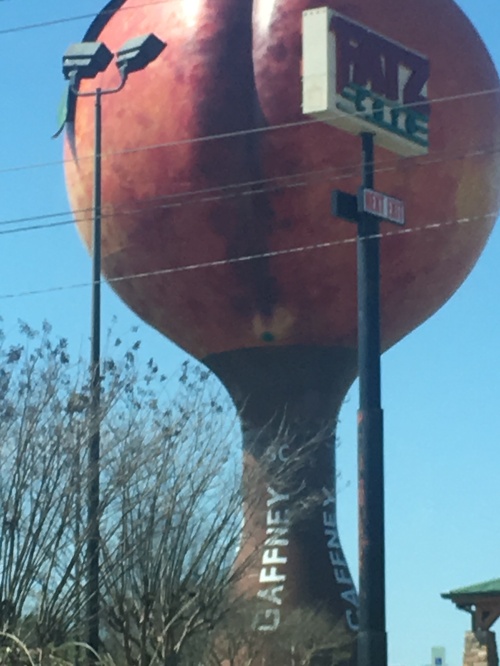