Catching up on graphic-novel reviews

TOTALLY AWESOME HULK: My Best Friends Are Monsters by Greg Pak and others is set during a period when Korean-American teen genius Amadeus Cho had become the Hulk and discovers it’s not as easy reining in the monster as he assumed (unsurprisingly, we’re already back with Bruce). Pak writes Hulk well, but this is a collection of random issues from different storylines, so it’s more a teaser than a standalone.

CHEW: Just Desserts by Jon Layman and Rob Guillory continues the goofy tone as Tony and John continue the hunt for rogue FDA agent Savoy, Tony and Amelia finally get into bed and we meet the super-chicken Poyo, who plays a larger role going forward. Low-key fun, but very fun.

HOW TO FAKE A MOON LANDING by Darryl Cunningham is well intentioned in exposing crackpot theories such as climate-change denial, The Moon Landing Was a Fake and anti-vaccination mythology. Unfortunately the visual style is flat (in contrast to say Larry Gonick’s flair for doing science in comic-strip form) and there’s nothing new to me besides the moon landing stuff.

SHELTERED: A Pre-Apocalyptic Taleby Ed Brisson and Johnnie Christmas is a grim little drama about a group of survivalists (“preppers” I guess is the current slang) who face an unexpected threat — the psycho teen son of one of them, who murders all the adults to set up his own little tyranny. Two teenage girls begin to suspect what’s going on, but will their friends listen? Grim and competently done, but not to my taste.

FEEDING GROUND by Swifty Lang, Christopher Mangun and Michael Lapinski is a good, absorbing story about a Mexican who helps illegal immigrants slip across the border; when his family piss off a local crime boss, they have to make the trip themselves. Unfortunately it’s interwoven with an unsuccessful story about werewolves that I couldn’t figure out and didn’t really care to. So ultimately, not a success. 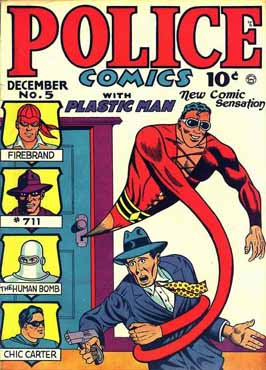 I recently began rereading Jack Cole’s PLASTIC MAN ARCHIVES with Vol. 1, and once again found myself in awe of Cole’s ability. While stretching, shapeshifting heroes are common enough today, Plastic Man represented something new in the 1940s (and was named, of course, after that cool, modern technology, plastics!). Cole takes full advantages of the visual potentials, plus he has a great sense of humor, pairing Plas with the most unlikely sidekick, fat, dimwitted petty crook Woozy Winks. By the end of the book (in which Woozy drags Cole himself into one adventure) Cole has definitely got the hang of things. Even before that he has some insane comedic ideas, such as a crime boss using an old-age home as a source of slave labor (every young guy he recruited got snatched up by the draft board, so …) Small wonder that while Plas started out as as backup in Police Comics (the breakout star was supposed to be Reed Crandall’s dynamically drawn Firebrand) he took the cover with #5 (by Gill Fox) and never looked back. Highly recommended.

#SFWApro. All rights to cover image remain with current holder.

2 responses to “Catching up on graphic-novel reviews”